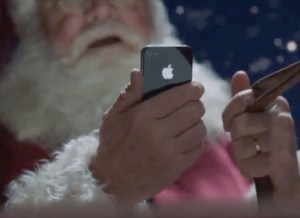 Apple has debuted a clever new ad for the iPhone 4S, showing Santa Claus using the Siri voice-enabled personal assistant to help him with his important Christmas duties.

Some analysts believe Siri could help Apple sell 30 million iPhone 4S units by the end of Q4 2012. Naturally, Siri has been become a focus point for Apple’s iPhone 4S advertising. Siri only officially works on the iPhone 4S, but many iPhone 4 owners have been looking for ways to port the application over to their phones. Just a few days ago, a new easier (and legal!) hack was discovered that lets iPhone 4 users get in on the Siri action.

The new Christmas-themed ad for Siri and the iPhone 4S plays to the voice assistant’s strengths. Santa asks how to get to someone’s house, how cold it is in certain U.S. cities and how busy his day looks. To the last query, Siri responds that Santa has “3.7 billion appointments.”

The smart holiday TV spot can be viewed below: