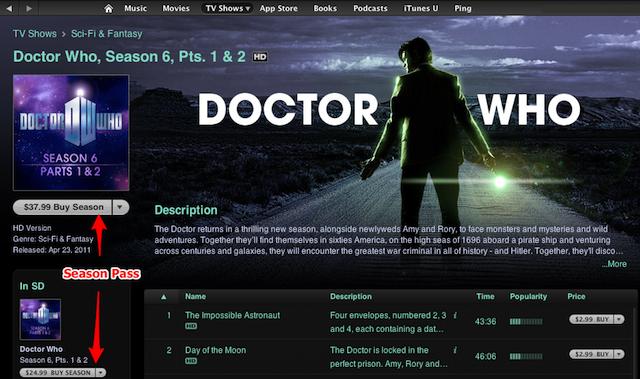 iTunes has always offered its customers a way to save a few bucks on digital music purchases if they buy the full album, and now Apple is extending that option to television shows.

This week Apple, added a “Season Pass” purchase option for most television series. Rather than spending $2 to $3 per episode, iTunes customers can now get a discount when they purchase all the episodes within a single season of a TV show. On average, the season pass option will save you $10 to $15 on a full season of TV. And like the album sales, you can choose to purchase the season at a discounted price if you’ve previously bought single episodes within that season.

While the new Season Pass option is nice, I’m not sure many people will really care. Both Hulu and Netflix streaming subscriptions are about $8 each per month. If you subscribe to both of them, it’s still cheaper than the majority of full seasons available on iTunes. Also, Hulu recently signed a deal to bring CW shows to the service, which means it has content from four of the five biggest TV networks. Since Hulu Plus subscribers have access to all the episodes in the current season, paying the $8 per month seems like a better option.

Arguably, the additional money you’re paying to iTunes does mean you technically own the shows, but I don’t know how big of a benefit that is either. Both Netflix and Hulu are available on a growing number of devices, provided you have a reliable Internet connection. (If, however, you plan on watching lots of TV shows on your iPad while flying on a plan every other week, then the season pass will certainly save you some cash.)

If you plan on purchasing more TV shows through iTunes because of the Season Pass deal, leave us a comment below.