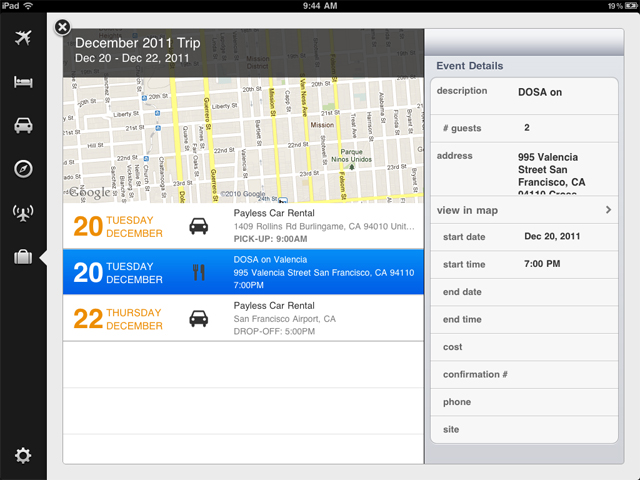 This is actually a major update that will turn Kayak‘s free iPhone app into a unified app optimized for all iOS devices, including the iPad, iPhone and iPod touch. The two-year-old standalone iPad app will be phased out, which means Kayak faces the tricky task of making sure all of its users switch to the new app.

The updated Kayak iOS app will introduce quite a few new features to iPad users. The design has been simplified, the search interface updated, and iPad users can finally search for rental cars. For those who actually book trips through the Kayak apps, there’s a great new autofill feature that makes it much easier to complete reservations. In the app’s settings, you can fill out a form with all of your information, such as name, address, phone number, email and date of birth — almost everything but credit card information. When you go to book a flight, car or hotel, the third-party site opens within the Kayak app and the information is automatically populated, cutting down drastically on painful iOS-keyboard time.

The coolest part of the update is the Trips feature. While not new — it was on Kayak.com and there was a read-only version on the iPhone app — the feature finally gets to shine on the unified app. “It’s exactly what TripIt is, but free and better,” Bill O’Donnell, Kayak’s chief architect, said in an interview. Like TripIt, the Trips feature consolidates all of your travel details in one place that can be accessed from any of your iOS devices or through the Kayak site.

The tool isn’t just for travel booked through Kayak; it handles restaurant reservations and other miscellaneous bookings too. Anything you forward to the Trips email address from your registered email is added to the itinerary. “You can write your hotel confirmation number on a cocktail napkin, take a picture and sent it to us, and we’ll add it to your trip,” said O’Donnell.

The new app is fast and well-designed, and could generate some much needed positive press for Kayak. Earlier this month, Kayak pulled its advertising from TLC’s “All-American Muslim” reality show along with Lowes. The company denied it was bowing to pressure from conservatives, glibly saying in a statement, “the show sucked.”

Here are some screens of the consolidated app running on an iPad: