Our analysis of venture funding from a variety of data sources revealed some interesting facts about last quarter’s deal flow.

Last quarter, venture capital firms invested $6.95 billion into 876 deals, averaging $7.9 million per deal, with the vast majority of funding funneling out of Silicon Valley in the form of expansion and later-stage investments in the software and biotech industries.

Compared to the late ’90s, when VCs were pouring funding into a wide range of dot-com startups before the bubble burst in 2000, last quarter saw more conservative investment numbers. When VCs did decide to invest, it was typically in the form of expansion and later-stage investments. 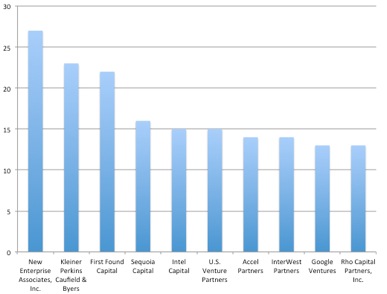 You can also view this list as an interactive chart comparing the top 10 most-active VCs.

Last quarter’s investments were highly focused towards the software and biotech industries, though dollar investments into biotech companies actually fell 18 percent and the number of biotech deals fell by 20 percent as compared to the previous quarter.

Funding to software companies increased by 23 percent from the quarter prior, making it the most-funded industry with $2 billion invested. The software industry received nearly 29 percent of total investments, according to data provided by Thomson Reuters and reported by Price Waterhouse Coopers.

The biotech industry came in second, raking in $1.1 billion with 15.5 percent of total investments.

The most active VC regions 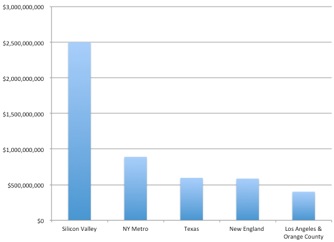 Investments by stage of development

Finally, the majority of last quarter’s deals were in the form of expansion and later stage investments, while startup funding made up only a fraction of total investments.

Grace Nasri is the managing editor at FindTheBest.com, a data-driven comparison engine.