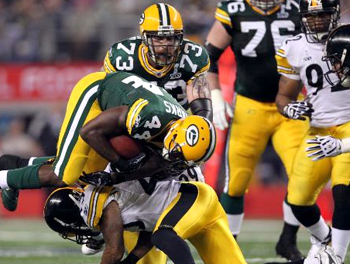 For the first time ever, NBC and the National Football League have agreed to live stream the Super Bowl online and on mobile phones in February, the two organizations announced today.

The Super Bowl is the most-watched television program around the world each year, and commanded 111 million viewers for the last game, so it’s a huge deal to see its distribution move from analog to digital. With many users choosing to “cut the cord” and get rid of cable boxes in favor of computers, NBC and the NFL likely saw value in bringing the games online and to mobile devices to reach an even-bigger audience.

The two organizations also said they would live-stream NBC’s broadcasts of wild-card playoff games and the Pro Bowl, on top of the Super Bowl. The games will be streamed at NBCSports.com and NFL.com through the SNF Extra web app, which features “HD broadcast, DVR-style controls, additional camera angles, in-game highlights, live statistics and interactive elements.”

NBC and the NFL started live streaming select football games in 2008, but this is the first time the organizations have agreed to show playoff games online. NBC claims Sunday Night Football streams average between 200,000 and 300,000 viewers, while 21 million watch the games on TV, indicating that the TV ratings aren’t being affected significantly.

The phone presentation will be much more limited in scope than the traditional desktop streaming presentation. Only Verizon smartphones running the Verizon NFL Mobile app will be able to watch the Super Bowl and playoff games on their phones. NBC and the NFL did not specify which phones in the Verizon lineup include this application.

This year’s Super Bowl will take place in Indianapolis on Feb. 5.