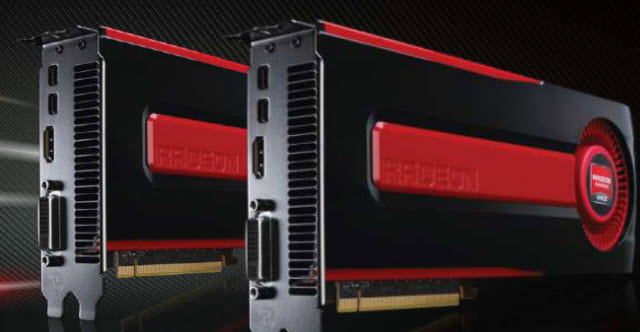 Advanced Micro Devices is launching what it calls the world’s fastest graphics chip with a new family of Radeon graphics chips today.

The Sunnyvale, Calif.-based chip maker said the code-named Southern Islands chips use a revolutionary new architecture that the company has been working on for five or six years. Dubbed “Graphics Core Next,” the architecture takes AMD’s graphics chips into the 28-nanometer generation of chip manufacturing process. That process enables AMD to put 4.3 billion transistors, or basic computing components, on a single chip. This kind of announcement makes PC gamers salivate.

If you take a game like Battlefield 3 and play it on a computer with three monitors, you will get a smoother experience than previous generation of graphics chips, said Devon Nekechuk, product manager at AMD, in a press briefing.

He said that the chip runs about 30 percent faster on the 3D Mark 11 Extreme benchmark test compared to Nvidia’s GeForce GTX 580 graphics chip. Gamers still want these kinds of chips, as do consumers who use big displays or multiple displays for high-end PC work. The chips will feed the $15 billion PC gaming ecosystem, which needs better hardware to run high-end games like Battlefield 3.

The graphics chip family will be known as the AMD Radeon HD 7900 series of chips and it will include the AMD Radeon HD 7970, the first coming to the market on Jan. 9. The chip has 2,048 stream processors based on the Graphics Core Next architecture. It can support as many as six monitors at the same time and can use 3 gigabytes of graphics memory, dubbed 3GB GDDR5/384-bit. It consumes about 300 watts, though will operate on a lot less than that. Still, it is enough to require an improved fan design and a sophisticated heat sink to cool off the chip during operation. At a static level, the 7970 will consume 15 watts of power.

AMD says the boards being launched with the graphics chips can be overclocked, or turned up beyond specifications, to over 1 gigahertz operation.

“There is a lot of overclocking headroom on this chip,” said Nekechuk. “The enthusiasts will really appreciate that.”

The family has three versions coming in the near future. The Tahiti (under the Southern Islands code name umbrella) is going to be called the AMD Radeon HD 7970 and it will be the world’s fastest graphics chip. Other lesser chips include Pitcairn and Cape Verde.

The new graphics cards (pictured at top) using the chip have a “long idle” feature that allows them to turn off power when the display is not in use. The new chip also supports Digital Discrete Multipoint, (DDM), an audio feature that embeds surround sound into each display when you are using as many as six displays. That makes for better surround sound capability.

It will be interesting to see if Nvidia, which has a press conference at the Consumer Electronics Show, can match AMD’s performance anytime soon. AMD said about 600 gaming titles support the graphics chip. Each Tahiti chip has 32 Graphics Core Next cores.