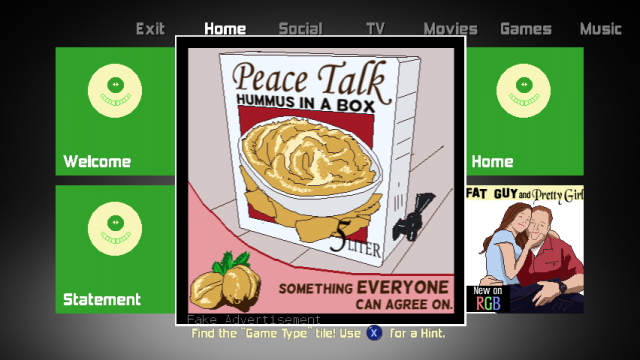 An indie developer has created a game satirizing the new look Xbox Live dashboard. Amid concerns that Microsoft is neglecting its indie games channel, ‘Game Type’ has emerged joyfully on the very platform it is sending up.

We recently reported on the discontent of many indie developers with the new Xbox Live dashboard . The main complaint was that Xbox Live Indie Games (XBLIG) are now so well hidden on the new dashboard, that they can easily be missed.

Weapon of Choice developer Mommy’s Best Games has run with this theme, basing an entire XBLIG game around the advertising-heavy new look dash. The game’s title, ‘Game Type’, is also the moniker of the dashboard tile that Xbox users need to select, in order to find and download indie games on their console.

The game itself is split into two parts. The first part involves actually finding your way to the game through an ad-ridden spoof console dashboard. The main game then starts up, revealing a side scrolling shooter, in which the dashboard adverts have come to life and need to be shot down. The lead character in the game is ‘hoodie girl’, described as the “idiotic stock photo” that Microsoft decided to assign to the ‘Game Type’ dashboard tile.

With tongue firmly in cheek, Nathan Foults of Mommy’s Best Games says “I’ve been thrilled Microsoft created the special dashboard tile just for our game.” He continues “with the incongruous stock photo of a woman in a hoodie doing a jump-kick, and the forgettable ‘Game Type’ title, it’s good to know Microsoft was advertising our poorly-named game, and not trying to label the console’s entire digital game storefront. Otherwise, it’d be a horrible match that would simply make no sense and generally lead fewer gamers to find the store and browse on their own terms.”

Hidden in the first part of the game is a wall of text which describes the motivation behind the game:

“The Xbox 360 menu system (or dashboard) controls how gamers find digital games on this console. The Fall 2011 update to the dashboard relegated the main path to browse all new digital games – Arcade, Indie, and Games on Demand – to a single, ill-named tile. This tile is called “Game Type”.

Between the terrible name and the absurd picture, it seemed no one really thought too hard about the game portal. In addition, TV and Movies are first on the menu. Bothered (and subsequently inspired) by this, I made Game Type.”

Despite the humorous nature of this protest, there is a real concern from many indie developers that their titles are being brushed to the side. Microsoft has stated that it is listening to feedback from developers, and is taking it into account for future programs. In the meantime, it is good to see that satire is alive and well on the XBLIG channel, whose content is not controlled directly by Microsoft, but rather by peer review.

Game Type is available to buy for 80 Microsoft points. If you can find it.