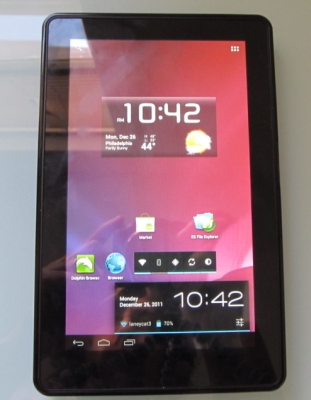 You can thank the intrepid hackers over at the xda-developers forum for the release, which marks the first time Android 4.0 has hit the Kindle Fire.

A hack such as this is likely the only way Kindle Fire owners can get their hands on Android 4.0. Given the hefty hardware requirements for Android 4.0 devices, plus Amazon’s need for a highly customized user interface on the Kindle Fire, you’ll likely never see an official Ice Cream Sandwich release on the tablet.

The hack, which is based on the custom Android firmware CyanogenMod 9, is certainly far from complete. Audio and graphical glitches (especially while playing videos) abound, and touch screen interaction seems fairly unresponsive, according to the above video from Liliputing.

Still, it’s a mighty first step for Kindle Fire hackers, and it’s likely the first of many such releases from various development groups. Given it’s $200 price and wide availability, the Kindle Fire is the new target for hackers looking to make a name for themselves.