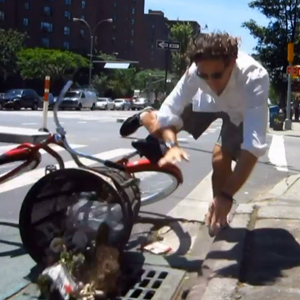 YouTube may have already picked the biggest videos to hit the web this year, but there’s a host of great videos that didn’t make the cut. From vigilante cyclists to deadpan taxidermists to obligatory cute kittens, the web was full of strange, funny, sad and infuriating events and characters.

We decided to cap off the year with a list of 10 viral videos we especially liked. While you’ve probably seen at least half of these, there’s a good chance you haven’t seen them all. In trying to define “viral,” we’ve decided not to count any stunningly made professional videos. No music videos starring the notorious Rebecca Black or mega-popular Katy Perry, no crazy views of Earth from space and no stunning visions of the future are in the mix here.

Here are the top 10 viral videos of the year:

New York City has been cracking down hard on cyclists this year for not riding in designated bike lanes. Although there are some cyclists who blatantly ignore laws and streetlights (I live there and constantly worry about being biked down), there’s wide mix of violations from pedestrians, drivers and bikers alike. In a move of defiance, one cyclist who gets an unfair ticket decided to make a video of what happens when he only rides in the bike lane. The results are quite funny.

Even though it was included in YouTube’s year-end list, we couldn’t help but include this cat-and-kitten clip in our list as well. It’s one of the most watchable clips we’ve seen in a long while because it’s just so darn cute. As much as my grandmother and I have radically different tastes, we both really love this clip.

The Chatroulette service — which lets people video chat with other random people — might have been a fad that died off in 2010, but the site and potential to use the service remains. One enterprising band decided to create the “Chatroulette Love Song,” which features a man and his band singing a love song to a girl he meets on the service. It might be the best thing to ever come from the service. Well, unless seeing random male genitals all the time is your thing.

The humongous earthquake and tsunami that hit Japan in March was one of the most-covered pieces of news of the year. The disaster caused more than 15,000 deaths and 5,000 injuries. Russia Today spliced some of the most harrowing early footage together while the event was still happening and posted it to the web. The result is a terrifying look at the power of a tsunami as it uproots homes and businesses like it’s nothing. It became viral because of the news, but it had staying power as a document to one of the year’s most important events.

Whether the flying rainbow “nyan cat” falls into the hilarious, surprising or infuriating camp depends on your personal preference, but there’s no denying the song and video was a meme that wouldn’t go away. The nyan cat video has more than 54 million views to date and has inspired countless parodies and related videos. There’s even someone who liked nyan cat enough to turn the repetitive ditty into a 10-hour-long version, which has more than 9 million views itself. That’s a lot of nyan.