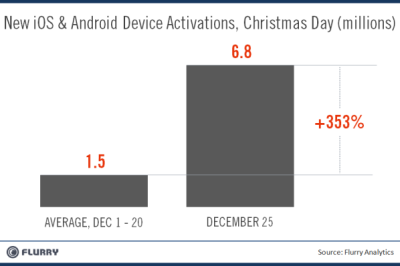 Christmas is a time for giving, and for many the gift this year was gadgets. Android and iOS devices saw a year-over-year 140 percent jump in activations this Christmas, with application downloads sailing past the historical norm.

Smartphones and tablets have surpassed the luxury phase, and are proliferating the market as every day household items. Though they still haven’t taken over feature phones, which own around 60 percent of the market, smartphones are widely adopted. Because of that adoption, they are being given as gifts left and right, with 2011 being the biggest year for Android and iOS devices as of yet.

According to Flurry, an app analytics provider, Android and iOS device activations averaged around 1.5 million a day for December, until Christmas when it shot up 358 percent to 6.8 activations in one day. Clearly, lucky boys and girls across the globe opened Santa’s gifts to find Xooms, iPhones, iPads, and more. According to a Nielsen report, 44 percent of kids in the United States requested an iPad for the holidays. If children aged 6-to-12 years-old couldn’t get the tablet they desired, their second choice was an iPod touch or iPhone. 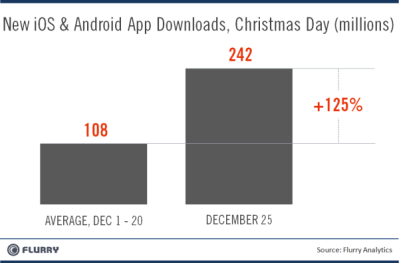 Prior to Christmas day, December app sales were steady around 1.8 million a day. Then, when everyone was finished opening gifts on the 25th, app downloads jumped 125 percent to 242 million. The rise started around 7am and continued throughout the day until it peaked at around 8pm and fell as holiday meal-stuffed people drifted off to sleep.

Perhaps Apple’s Siri commercial featuring Santa isn’t as silly as it comes off. Smart devices are becoming the norm, and I wouldn’t be surprised if Rudolph gets laid-off in exchange for Siri’s sleek purple microphone.