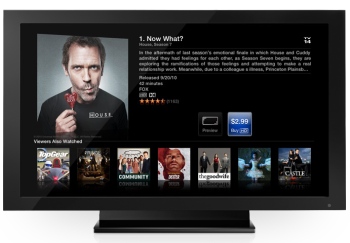 Apple is allegedly assembling components for a 32- and 37-inch iTV, the Apple branded television set that can connect to the internet for streaming media.

The news comes from Taiwanese blog Digitimes, which has previously picked up accurate news from sources in Apple’s supply chain. The report indicates that Apple is planning to begin assembling the components in the first quarter of 2012 and will launch the iTV product itself in the summer. As for the components, Digitimes reports that Samsung will produce the chip set for the device, while Sharp will produce the screen.

Apple’s first entrance into the realm of televisions came with the first generation of Apple TV, which allowed people to store digital media on the device as well as access some internet content. A second, more successful version was released that cut the cost to $99 and focused entirely on the streaming experience.

It’s hard to believe Apple would produce a television set, since price is a main factor in consumer buying habits for internet-connected TV products, and an Apple TV is likely to be far more expensive than those from competitors. Still, information found in the recent official biography of former Apple CEO Steve Jobs does signal that the iTV is in development. Also worth noting are the rumors that Apple was briefing media executives on a new Apple Television.

At this point, it’s still impossible to know exactly what Apple is working on. But it’s clear that the company’s plans include shaking up the smart-TV market.