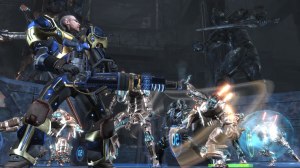 While still far from over, a court ruling dated December 22 can be seen as a major setback for Silicon Knights in their suit against Epic Games. According to The Escapist website, the motion by Epic Games to exclude key opinion testimony from certified public accountant and financial analyst Terry Lloyd about potential damages in the suit has been upheld by the judge on the case.

The suit, filed by Silicon Knights in 2007, charges that Epic Games “made false representations concerning the license agreement and the functionality of” their Unreal Engine 3, allegedly resulting in what Silicon Knights says was a two year delay, an end to negotiations for Too Human sequels, and a damaged reputation.

Citing court papers, The Escapist says that key witness “Lloyd identified over $58 million in damages across six key categories,” with a detailed list available at the site. The judge’s ruling on December 22 strikes these specific damage estimates from being admitted into evidence, seeing them as based on “his own subjective conclusions about an industry in which he had no prior knowledge or experience,” as well as noting several mistakes in estimation, including using games that were not similar enough to Too Human in terms of marketing and budget to estimate potential sales or income.

As far as reputation damage, apparently the documents show that Silicon Knights was in talks with several other publishing companies, such as Vivendi, Capcom, THQ and Namco, as well as in negotiations for two other games’ development.

While it’s truly for a judge to decide the truth of the matter, this sort of blame displacement for a game that didn’t do very well even upon release seems just a bit overwrought. While this most recent ruling by no means indicates an end or final victor in this long-fought suit, Epic Games can count this one as a win.