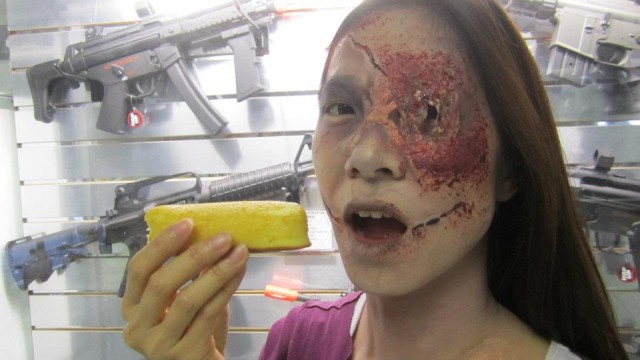 Sporting Hollywood-level production values but produced on a shoestring, the video quickly surpassed half a million views on YouTube, and the teaser trailer alone garnered over 400,000 views.

GamesBeat sat down with Northern Five director and co-founder Adrian Picardi for an exclusive interview to discuss the film’s budget, concept, reception, and why Hollywood is so damn bad at making video game movies.

We also have a gallery of 173 (count ’em!) exclusive behind-the-scenes images and a Making Of video on the second page of this interview.

GamesBeat: Can you detail Northern Five’s relationship with Airsoft GI? Did they put up the funds for the production?

Adrian Picardi: A childhood friend, Tim Seargeant, who is now the online face for Airsoft GI, had wanted to make a fun video with us for awhile. It wasn’t until when he convinced his boss to allow us to shoot at their property and store front that we were able to conceptualize the idea. This really wouldn’t have happened if both N5 and A.GI weren’t passionate on the idea. It’s like the Avengers only with our favorite videogame characters.

GB: What is the intent of the film? What are you or Airsoft GI hoping to accomplish with it?

AP: For N5, absolutely nothing but hope that it could bring a smile to the gaming community.

GB: Can you talk about the budget for the film, and break down how it was distributed?

AP: We had just enough of a budget to feed the entire crew, ship out the costumes from across the country, and pay for a couple of the props and some of the crew’s gas. Everything else was donated. The entire crew came out for two nights unpaid. I couldn’t believe how passionate everyone was. It was a really fun experience.

GB: I understand you had a crane? Is that a hard thing to acquire?

AP: Yes! Very hard. Luckily we worked with an amazing gentleman on a couple older projects and were able to build a great relationship with him and his company. When we told him it was fan film he was instantly on board and came out for a couple hours with the crane on the second day of shooting.

GB: How did you conceptualize the idea?

AP: At first we were going to do a full on Battlefield 3 video but so many had been already created. The same went for many of Valve’s other properties, so we felt it was time to try something different with one of our other favorite games. There are so many zombie fan films out there and since we wanted to make this for the gaming community we took it into a different and unique direction.

GB: What sort of script was in place?

AP: The script was worked on in a collaborative fashion. From there we had to accommodate what we could and couldn’t achieve in two nights and with the prep time of only two weeks. We actually had the entire Left 4 Dead cast in the film but couldn’t find an actor in the character’s age range who was willing to stay up for two nights in a row for no pay. So we ended up tweaking the script. We actually tore out 4 pages of the script on the first night of shooting because initially we were suppose to shoot for three nights but it was due to rain on the third day.

GB: How do you go about wrangling in all the necessary talent and crew?

AP: We posted a casting call online. From there we had to sift through the talent to see who looked like the video game characters the most. Since we had a very tight pre-production schedule we hired them without having the proper casting session but I feel we were very fortunate that we had found a great team of people who actually looked the part.

GB: What was it like working with cosplayers and models who don’t typically “act” as is needed in a film like this?

AP: I was actually extremely worried that they wouldn’t understand the filming process and just become fed up with all the madness. But everyone who came out for this shoot was amazing and was a blast to work with. Meagan Marie, whom I was a fan of after seeing her GOW Cosplay article, came out and was completely thrown off guard since she had never acted before. But after a few takes she picked up on everything very quickly and did a kick-ass job. They all were really fun to work with.

GB: I heard it was pretty cold during the shoot. Is weather something you planned for, and how did you deal with it?

AP: We were hoping for three dry nights but it rained the last day so we changed the script. Since everyone came out for free we couldn’t reschedule either. So we ended up not shooting the entire thing that was originally planned but it still worked out for the most part in the edit. 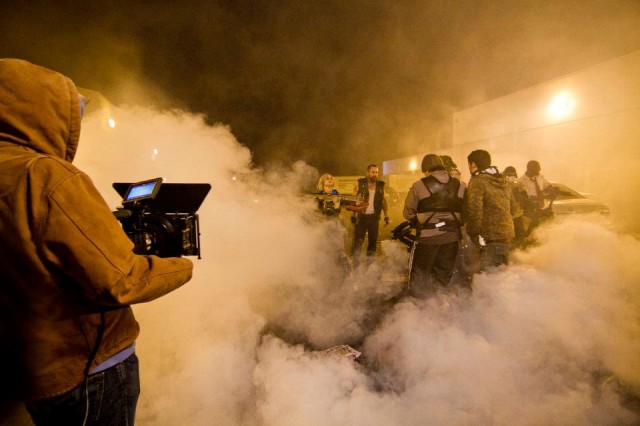 GB: I think my favorite thing about fan films is that none of them are directed by Paul Anderson. Hollywood has become notorious for taking popular video games and making nightmarishly-bad adaptations. Why do you think that is?

AP: Because I believe most of them never played the actual video game until they acquired the script! So far I can’t say I’ve seen a hands down amazing Hollywood “game to movie” yet.

GB: What is it about Hollywood filmmakers that makes them want to adapt something by stripping out pretty much everything that made the video game version popular in the first place?

AP: Money? Making a movie for only the gaming demographic means less money made. At the end of the day it’s still a business and risk-taking moves can be frowned upon at times, such as making a true-to-heart video game adaption. But I have no doubt in my mind after the comic book pool and 80’s-90’s remakes run dry the film industry will start diving into the video game arena even more so then now. I’m betting with the huge success of Call of Duty they are already planning on turning it into a movie… I mean they already made a Jeep based off the game why not a movie? I just hope they put the source material in the right hands.

GB: Did you look at any other fan films before making yours? Did you learn any interesting dos or don’ts that you’d care to share?

AP: We did. We realized we wanted to make something different, something they haven’t seen before, and rather something for the entire rapidly growing gaming community at large. One thing I learned — and I’m actually slapping myself in the face for not thinking of this — but we should have called it something different other than Left 4 Dead since the twist came out of nowhere for most people.