GB: What are some of your primary film influences?

AP: I absolutely love David Fincher. Huge Fincher fan, I wish there were more filmmakers like him who have a strong visual sense along with the ability to tell stories in a fresh way. The one director in specific who actually inspired me to pursue a career in the film industry is Tony Scott. That guy still inspires me till this day. Other influences are other directors such as Zack Snyder, Michael Mann, Paul Verhoeven, and too many others to list.

GB: Are you familiar with Sony’s recent “Michael” commercial? Did you look at that all when making your film?

AP: We actually got this idea from being inspired by the movie / comic book The Avengers and wanted to do the video game equivalent, only with the antagonist being zombies. We later then heard about the commercial “Michael” and thought that was genius as well. In the end the PS3 fans have that and I guess the Xbox 360 fans, me being one of them, have this. There will always be feuds between consoles fans and PC fans. I used to be a huge PC gamer but as I grow older I find myself having less time to sacrifice and opted to go the quicker route being the console. It allows one to skip the whole install times and other headaches one may encounter when playing on the PC.

GB: The film seems to be doing very well, but there’s a pretty love it-or-hate it response happening across the Web. Was that to be expected?

AP: We actually took that into consideration before creating the film but in the end we decided to just go with the crazy idea because I strongly believe when creating something you feel passionate about you should never allow the fear of other people’s opinions and criticism stop you. We felt the zombie genre is so over done by now that we wanted to try and do something different. I can’t agree more with both sides though and I love hearing what others have to say on both sides of the table. The first half actually turned out way better than we had expected! We too now wish that someone would make a real Left 4 Dead film for theaters. It would be awesome… But in all seriousness, I am really happy that we kept all the crazy characters in because where else would you get to see a witch being destroyed by a plasma grenade or a Smoker being chainsawed by a lancer.

GB: Did you consider just playing the second half of the film straight, with no cameos? It has a sort of From Dusk Till Dawn feel, where the first half is very realistic and then it abruptly goes batshit crazy.

AP: We did. But this was something we always wanted to do. It’s the “what if’s” that sparks your imagination. And this was one of them that we went with. That’s what I love about film, music, video games, or anything else in the creative realm. You can literally create anything that your imagination conjures up. Art is a subjective medium. No one can tell you you’re right or wrong but people will have their own strong and completely valid opinions. It’s up to the artist to follow his/her instincts and for this I felt like doing something ridiculous with the hope to make people laugh at the insanity of it all. Before ripping out 4 pages of the script we also had Sub-Zero, Gordon Freeman, and Sam Fisher in the mix as well but we couldn’t acquire their costumes in the short amount of time we had. I still can’t believe the team was able to pull this entire thing off in a couple of weeks. We worked with an amazing group of talented individuals. 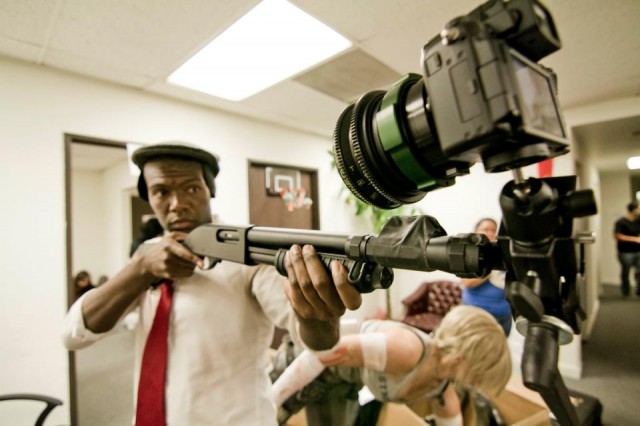 GB: Can you talk about the special effects (planning, software, etc.), and how long post took?

AP: Well since there wasn’t a real budget I was stuck doing all of the VFX and Compositing myself and Daniel Scruggs who took care of all the CGI elements. In total it took about a week or so because we both have day jobs and this was a side thing. With the small amount of days we gave to Daniel I couldn’t believe how well done the shots turned out. He blew me away with the Tank shots. He’s a very talented guy. I sent him the raw plates and described what needed to happened and after going back and forth a few times he nailed it. And the craziest thing of all was we never sat in the same room since we both were so busy. We would just send things back and forth through the internet and give notes over Face Time and such.

GB: If you could have any one of the cameo characters with you in a zombie apocalypse, which would it be?

AP: Hands down the Gears of War crew. They have chainsaws on their guns… End of story. I saw a comment that made me laugh so hard which was the request to add Dovahkiin from Skyrim in the video. I couldn’t help but to think of him riding in on a horse with the Dovahkiin theme song playing while the rest of the characters freeze with a confused look on their faces. I think that’s what really inspired me to do this. I’ve been stuck in a room for a year developing a couple feature films, going to meetings, and tackling the more serious side to film making that I just wanted to do something fun and outrageous for a change.

GB: What’s next for Northern Five?

AP: We are currently developing three projects right now, all of which I’m super excited about. We have the opportunity to be mentored by an amazing manager who is really helping and guiding us young filmmakers toward our goals. In between that look out for more commercials, music videos, and who knows, maybe another fan film that takes a more serious tone? Who knows.