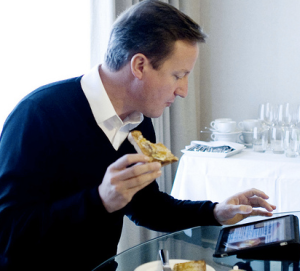 Leading a nation is a tough gig, but soon there may an app for that, too.

British Prime Minister David Cameron, a huge iPad fan, is having a special iPad app made for his particular country-running needs.

According to a report in The Times, the Prime Minister (and someday soon, anyone else) will be able to use the app to get broad and detailed information about Great Britain’s vital signs.

The Times’ sources say the app is currently under development and will be released to the public once it is completed. A report on GigaOm has sources saying the app has been in development for a couple months already.

When completed, the app will likely act as a sort of dashboard to show at-a-glance information and news on economic and social health barometers. Data will come from the UK’s National Health Service, crime reports and unemployment agencies, as well as Google and Twitter.

Advisers on the Prime Minister’s staff reportedly got the idea for the app during a recent trip to the United States.

Cameron is no stranger to the world of Silicon Valley technology. He famously video-chatted with Facebook founder Mark Zuckerberg last year about how the social network could help the UK solve its financial woes.

However, the PM’s attitude toward social media hasn’t always been so friendly. During the London riots earlier this year, when Twitter and Facebook were used by rioters, Cameron publicly contemplated banning social media use for those who would use such networks to plot against the government or to break the law.

At that point, Twitter execs were called in to meet with UK government officials about the service’s role in the riots.