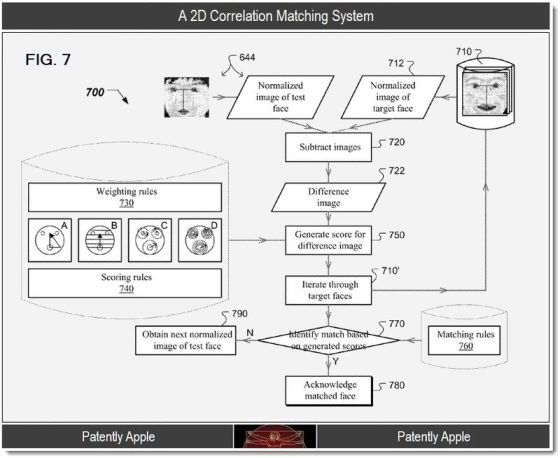 You can bet if one major smartphone manufacturer develops a new feature, its competitors will follow suit. Apple has applied for a facial recognition patent, according to an application form published by the U.S. Patent Office. Looks like Apple is right on Google’s heels; in mid-December the Android 4.0 Galaxy Nexus was released, with the ability to unlock the phone by recognizing your face touted as a key feature.

The proposed technology uses a 2D correlation matching system to compare the image of the person trying to unlock the device with a reference image, i.e. an image the device would be programmed to remember. By analyzing the differences between the two images, the device could confirm the identity of the face in question and unlock. The patent specifications put an emphasis on skin variations and the location of certain facial features and would possibly eliminate the need for specific lighting conditions for accurate recognition.

Facial recognition abilities are still shaky as far as security goes. The Galaxy Nexus can be unlocked with a photo of its owner, as Mobiledia reported in November. One of the figures included with Apple’s patent filing hints at the ability for the facial recognition to detect the user’s level of attentiveness, thus potentially avoiding the Galaxy’s flaw. For example, the device wouldn’t unlock when its owner merely glances quickly at its camera.

Patently Apple reports that in addition the facial recognition patent, Apple previously filed for a presence detection patent and a high end 3D recognition patent in 2011. This latest patent was actually filed in the second quarter of 2010 by inventor Robert Mikio Free, long before Android brought this type of technology to market. Perhaps Apple is up to something and looking at new ways to unlock its devices. However, don’t expect this type of technology to show up in whatever iPhone Apple decides to release next; right now it’s all just speculation.