Skyrim was the “most played” game of the year, and we voted Uncharted 3: Drake’s Deception our Game of the Year. But if you paid attention only to the big games this year, you may have missed some of the most important news ever to hit the game industry. It’s no exaggeration to say that 2011 was a transformational year for the game industry. As the game industry’s trade group chief, Michael Gallagher, said, “The word ‘historic’ is overused, but as we look back on 2011, it is a perfect fit for our industry’s year.” Here’s a recap of 13 events that made this such a big year for games. 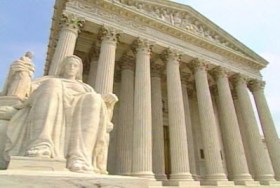 1. Video game violence case. The U.S. Supreme Court put to rest a decades long legal debate over video game violence and whether game publishers’ right to publish violent games without restrictions on who could buy them is protected by the First Amendment. The court struck down a California law as unconstitutional because it banned the sale of violent video games to minors. For the first time, the highest court in the country will give games the same legal protection that books, plays, and movies enjoy, because games “communicate ideas through familiar literary devices and features distinctive to the medium.” The court cited a previous case that held, “the basic principles of freedom of speech do not vary with a new and different communication medium.” With that, a long chapter of legal warfare will end and the video game industry will finally enjoy its own measure of creative freedom. 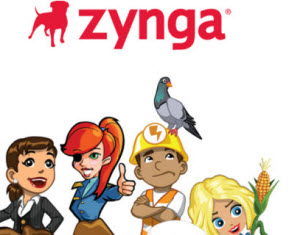 2. Zynga and Nexon went public. They each raised $1 billion or more in the biggest initial public offerings ever to happen in the 40-year history of the industry. The offerings were somewhat rocky, but after the dust settled, Nexon was worth around $7 billion and Zynga was worth more than $8 billion — valuations that made them more valuable than Electronic Arts, which was founded in 1982. Nexon was the Asian company that pioneered the free-to-play, virtual goods business model, which, has proven an effective way for game makers to make money despite rampant piracy. That model made it OK to buy virtual goods in games in micro-transactions. Zynga took that model and ran with it on Facebook, growing at an incredible rate from nothing in 2007 to more than $1 billion in sales now. We wrote an in-depth story (now an eBook) about Zynga’s journey to the IPO. The bears say that the Gold Rush of social gaming won’t last. But with mobile gaming coming on fast, it’s not so easy to bet against the upstarts of gaming. This story has just begun, and it will be interesting to see what Zynga will do with an extra billion dollars in cash. 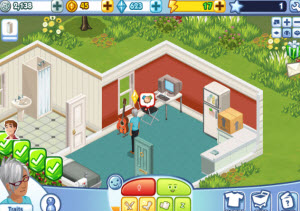 3. EA strikes back. Electronic Arts had been trying to catch up with Zynga in the fast-growing social game market. But EA finally outmaneuvered Zynga by purchasing PopCap Games for at least $750 million, snatching the casual game hit maker away from Zynga. Then EA launched The Sims Social, based on the popular Sims games that had sold more than 140 million units. The game was the first non-Zynga game to grow exponentially in a matter of a couple of months. The Sims Social outgrew FarmVille but fell short of unseating CityVille at No. 1. But it showed that the unstoppable Zynga could be beaten with a better game. Jeff Brown, a spokesman for EA, joked, “The Sims Social proved they can bleed. And if they can bleed, we can kill them.”

4. Console game sales flatten. Even in November, one of the biggest months for retail game sales of the year, the U.S. game industry barely grew at all. That means that 2011 will likely go down as a year for console and PC retail game sales. It’s hard to believe that, in a month when Call of Duty Modern Warfare 3 debuted, the industry couldn’t grow over year-ago numbers. That means more dollars are going to the market leaders, and the also-rans aren’t getting much of the pie at all anymore. Meanwhile, mobile and social gaming are growing, helping to offset the sales losses. This doesn’t mean that console games are dead. But it means that there will be changes in the ranks of the top game companies as this transition plays out. And it means that the console makers had better stop milking the cycle for profits and better move on to introducing new machines that can recapture the public’s imagination. 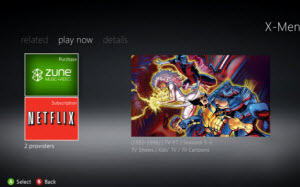 5. Games spread to new platforms. Google+ emerged as a new platform to take on Facebook in social network games. OnLive enabled game streaming of console-like titles to smartphones and tablets, making those devices into even better gaming platforms than they already were. Smartphones and tablets saw game usage soar. As Seamus Blackley, co-creator of the Xbox said, it’s as if the public demands that every single new device or platform be able to play games.

6. Game platforms morph into entertainment platforms. Microsoft upgraded Xbox Live to a new Kinect-enabled, voice-controlled user interface and added more than 40 entertainment services. The goal is to transform the entertainment experience on television, adding everything from YouTube to Comcast on-demand shows on the web-connected game console. Microsoft has also improved the quality of using Kinect voice commands to move from one choice to another, or to search through all of the entertainment options at your disposal in an instant. The latest update was one of the biggest in the past five years for the Xbox 360 because Microsoft is trying to improve the experience of watching entertainment. It also includes cloud-based access and storage for gamers to improve the basic gaming experience. 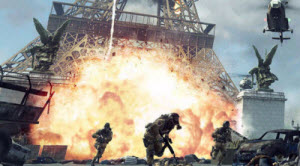 7. Modern Warfare 3 sells $1 billion worth in 16 days. All year long, it was fun to listen to the bluster between rival shooting game executives as Battlefield 3 squared off against Modern Warfare 3. But the big victory went to Activision Blizzard’s Call of Duty series. EA’s Battlefield 3 was no slouch. But Call of Duty Modern Warfare 3 sold 6.5 million copies on its first day and generated $400 million in revenue, shattering all entertainment records. It went on to shatter other records as well. Possibly even more significant, after some growing pains, Activision Blizzard managed to launch Call of Duty Elite, a gamer social network for Call of Duty fans. That network could be key to changing Call of Duty from a once-a-year launch to a year-round subscription gaming service. 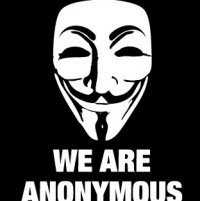 8. The PlayStation Network gets hacked. The most embarrassing comeuppance of the year started when Sony sued hacker George “Geohot” Hotz, who had broken the digital locks on the PlayStation 3. Then the company went after consumers who had used the hacking tools provided by Hotz. That’s where Anonymous, the hacktivist group, stepped in. It attacked Sony and evidently distracted the company so much that it didn’t notice cyberattackers had exploited its network weaknesses. The attack brought down the PlayStation Network, preventing 77 million users from logging in to play online games. The network stayed down for more than six weeks, forcing the CEO of Sony and top PlayStation executives to apologize to consumers and offer them goodies to lure them back to the network.

9. Nintendo flops with the 3DS. Nintendo bet heavily that stereoscopic 3D would wow users, but its handheld 3DS didn’t take off like the Wii or the DS did. Beset by competition from Apple and Google Android devices, the 3DS wasn’t as appealing, since games could cost as much as $40 each, compared to free or 99 cent iPhone games. Nintendo had to slash its price on the 3DS by 40 percent and accept a fiscal year loss for first time in decades of outstanding financial performance. Sales have improved, but the jury is still out. The problem is that kids have an easy migration path from the iPod Touch to the iPhone to the iPad. With those options, they may not need a 3DS. 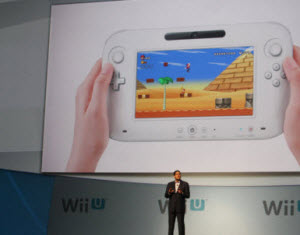 10. Nintendo unveils the Wii U. At the E3 trade show in Los Angeles, Nintendo finally took the wraps off the Wii U console, debuting in 2012. The machine takes Nintendo into the high-definition age, and it sports tablet-like controllers with small displays. The system barely catches up with the processing power of the Xbox 360 and the PlayStation 3. So it’s not clear if gamers are going to go hog-wild about this kind of machine, particularly as Microsoft and Sony are likely to launch more powerful machines in 2013. The ball is in Nintendo’s court. It has to prove that it can recapture the magic of the Wii, which is the best-selling console of the generation but has fallen out of favor.

11. Sony launches the PlayStation Vita. Having put the embarrassment of the PSN hack behind it, Sony launched the PlayStation Vita handheld gaming system in Japan. It is the company’s answer to the 3Ds and the iPhone and iPad, with a high-end console-like gaming experience. The system sales started well enough, though technical troubles have dampened the initial enthusiasm. The system’s success is critical for Sony, but it seems like an uphill battle.

12. The iPhone and Android smartphones triumph over the game portables. Apple helped cement its ascendance in gaming with the launch of the iPad 2 early in the year and the iPhone 4S in the fall. Using the A5 processor, those devices made it possible to run console-like games like Infinity Blade II, and more and more game fans wondered why they would need to buy a dedicated handheld with $40 games. In 2011, iOS and Android had 58 percent of the U.S. portable game market, while Nintendo had 36 percent and the PlayStation Portable had 6 percent. That was a huge turnaround from 2009, when Nintendo had 70 percent with the DS, Sony had 11 percent, and Android and iOS had only 19 percent of the market in terms of game software revenue, according to mobile analytics firm Flurry. Google announced that the Android Market had hit 1 billion app downloads per month. Nintendo responded with the launch of the 3DS, but users didn’t like the stereoscopic 3D and Nintendo had to crater its prices and report a rare loss. Sony trashed the PSP in favor of a new handheld, the PlayStation Vita. That may be too little too late. 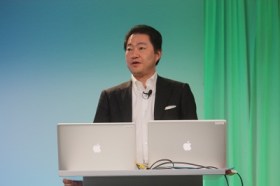 13. 3D games finally hit the web. The launch of the Google native client for the Chrome browser went unnoticed by much of the industry on Dec. 8. But the three-year effort makes it possible to play higher-quality 3D graphics games on an ordinary web browser. Square Enix chief executive Yoichi Wada (pictured) said his company has been waiting for the day for a long time. The company created a version of its Mini Ninjas game for Chrome as a “native client” game, and many other titles will follow. The benefits of running a game natively in the Chrome browser are high performance, security, and the ability to port to the system easily. For game developers, this represents a chance for a much wider audience, as Chrome has been downloaded more than 200 million times. Meanwhile, Unity Technologies also launched the ability to debut Unity-based 3D games via Adobe’s new Flash Player 11. That will also get 3D on the wider web.