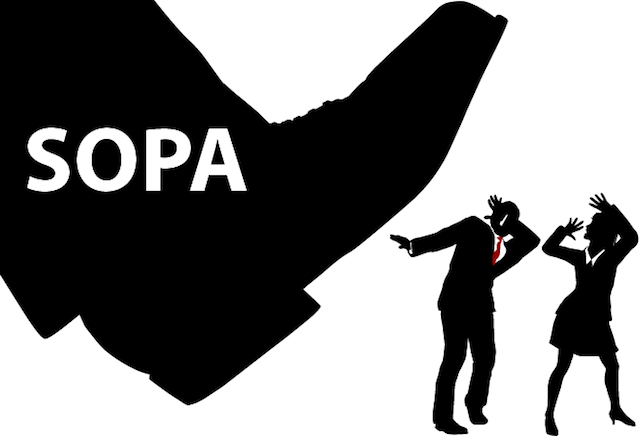 Personally, my political positioning is less about a single litmus test and more about the ideal that personal freedom is of utmost importance. It should only be trumped in the most serious of situations. As a natural extension of this belief, it means that less government is always preferable to more government — especially when it comes to the internet.

Recently proposed legislation like the Stop Online Piracy Act (as well as the Senate version, the Protect IP Act) would needlessly rip away many of our personal freedoms by transforming the internet into a bureaucratic cesspool. It would kill tech business innovation and strengthen powerful companies.

So as an entrepreneur in the tech business world as well as a libertarian, there are many reasons to both personally and professionally stand against SOPA. (If you haven’t done your research yet, check out the many articles out there, including this one.)

One thing that is consistent to any libertarian ideal is that legislation almost always has unintended consequences — things that the politicians never anticipated when they drafted the bill.  In the world of technology & internet, these unintended consequences are even more stark, because the legislators barely know how to turn on their blackberry devices. And now they want to create board legislation that will govern the entire internet.

Anyone see a problem here?

No. It was the rapid transition to digital content & the emergence of new distribution channels that catered to lower costs, more personalized consumption, and the desire to ‘access anywhere’.

History shows us that laws can’t keep up with the pace of technology. And moreover, most laws that attempt to keep pace often have unintended consequences that hurt more than they help.

In 2006, the Supreme Court ruled against the Grokster Peer-to-Peer (P2P) network, stating that networks are liable for the copyright material they share. Grokster was shutdown, which in theory should have been a huge win for the entertainment industry. But it wasn’t a win. Two years later P2P sharing was even more rampant because many developers created new P2P networks that simply avoided the parts of the law that got Grokster in trouble (decentralized servers, temporary storage of data, etc). To keep up, new laws would be required. Then those laws would have to be taken all the way to the supreme court. It’s a rather time consuming process.

Moreover, we continue to incorrectly focus on creating laws (and subsequently enforcing said laws) as a way to stop piracy, despite several studies showing that it has little to no effect on the overall problem. People hate to hear it, but the free market is much more effective at solving piracy than anything else. Can you imagine what would happen if these companies spent their efforts on innovating and competing instead of trying to hold on to antiquated business models?

The government has a history of creating laws that have unintended consequences. The Americans with Disabilities Act actually made it more costly to hire people with disabilities & reduced their employment (PDF). Another example is The Endangered Act, which resulted in landowners actually destroying habitats on purpose (PDF). With SOPA, the consequences aren’t bizarre or unforeseeable like the two previous examples. Leaders across the internet have actively outlined the potential for catastrophic results should SOPA become law. This is what makes the SOPA (and PIPA) acts so mystifying to most of us. How could our politicians vote for something that will be so bad?

I’ll tell you how and bring it all home for you. Their lack of knowledge in crafting the bill is the same Achilles heel when it comes to understand its negative consequences. The supporters of this bill (a.k.a. the businesses that contribute to a politician’s reelection campaign fund) are suffering for reasons that have little to do with piracy. They could spend their time far more effectively than trying to enforce the unenforceable.

The bottom line is that SOPA is bad legislation and it’s time for everyone to get involved. Don’t let elderly politicians, who pander to their donors, put restrictions on the internet that don’t even solve the problem of piracy. Laws are for honest people. The pirates will do what they want regardless. SOPA will just make it harder on the rest of us.

Nicholas Holland is the founder of CentreSource interactive agency, mentor for Nashville, Tenn.-based startup incubator JumpStart Foundry and a seasoned entrepreneur. He recently closed a round of funding for his new startup Populr, a service that enables customers to easily create and publish POPs (published one pagers) that launches in 2012.