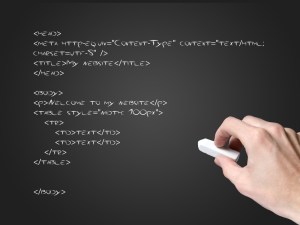 If you, like many wanna-be nerds, made a new year’s resolution to learn to code (or code better, or learn a new language) in 2012, Codecademy has a lovely new resource for you. And it’s totally free, too.

Codecademy is a startlingly easy-to-use code-teaching website that debuted last year at Y Combinator’s Demo Days. It’s easy enough for a complete beginner to use; just type code snippets as directed in the interactive console.

Now, the young hackers in the Codecademy have launched Code Year. Codecademy co-founder Zach Sims writes to VentureBeat that the new site is “the beginning of an initiative… to get more people to learn to code in 2012.”

As of this writing, more than 55,000 people have signed up for the challenge. Sims says that at one point during the day, around 100 people per minute were signing up.

Codecademy is joined by partners such as Y Combinator, TechStars, HackNY and Girl Develop IT in this project.

“We’re working with a bunch of other organizations to make sure 2012 is the year that programming begins to enter the mainstream consciousness,” says Sims.

Codecademy raised its first round of funding late in 2011. The $2.5 million chunk of change came from Union Square Ventures, O’Reilly AlphaTech, Thrive Capital, SV Angel and individual investors such as Dave Morin and Naval Ravikant.

The company launched in August. At that time, Sims told VentureBeat, “While the entrepreneurial community has exploded within the past year or two, there’s a constant shortage of developers and a tremendous number of businesspeople trying to learn to code … Programming literacy is going to be an incredibly important skill in the next few years, and we hope we can bring that to new groups of people.”

Codecademy lessons currently include instruction in JavaScript and jQuery.