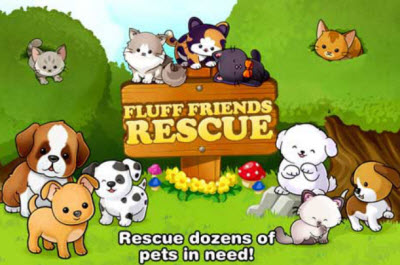 The iOS game lets users grasp the real-world challenges of rescuing pets by having them set up a rescue operation, nursing animals back to health and running an animal shelter.

The game is the first created by the former SGN game studio in Argentina under the full direction of the Los Angeles-based MindJolt management team. MindJolt, which published and distributed games on Facebook, bought the company last year and has been using it as a springboard into the mobile market. Now the Fluff Friends Rescue game is the company’s first stab at its own original mobile content, said Colin Digiaro, chief operating officer at MindJolt SGN, in an interview.

Digiaro said the idea for the game came from studying all of the pet games in the App Store. Almost uniformly, the games required players to purchase pets from a pet store, which are often criticized for getting their animals from “puppy mills.” The game highlights the fact that there are more humane ways to adopt pets, such as through rescue operations.

“We created a positive game with a more appropriate message for gamers,” Digiaro said.

The Humane Society of the United States liked the socially aware idea enough to become a partner on the game, which features cute and cuddly animals. The name comes from SGN’s older Fluff Friends game, which carries some brand recognition since it once had a large number of users. The user spends time rescuing strays and nurses them back to health, helping them increase their happiness with veterinarian, food, grooming, and play-time activities.

“Fluff Friends Rescue goes above and beyond the message that adopting shelter pets is important,” said Betsy McFarland, vice president, companion animals for The Humane Society of the United States. “It makes the point that in addition to a loving home, pets need proper nourishment, regular grooming, play time and quality medical care; these vital messages about pet care are what elevates Fluff Friends Rescue from other pet games and why we’re excited to be involved.”

The game is available now for the iPhone, iPod and iPad, and other versions for Facebook and Android could come out later. The game allows users to purchase Humane Society-branded items, and the proceeds of these particular items will be donated to the Human Society of the United States’ Animal Rescue Team.MindJolt SGN has more than 35 million monthly active users, 45 million mobile downloads, and 80 million installs on social platforms. The company is led by Chris DeWolfe, founder of MySpace, and is funded by Austin Ventures.