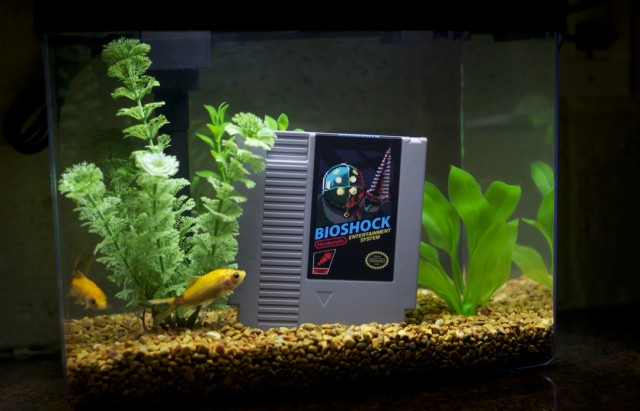 72pins is made up of a small team of retro art makers who take modern games — such as Halo or God of War — and reimagine them as classic Nintendo Entertainment System (NES) carts.

Cleverly coined as “NEStalgia” and named as one of Time Magazine’s top holiday gift picks for geeks, the end result speaks for itself. The unique pixel art is applied to an actual working NES cart, meaning that copy of BioShock may actually be Faxanadu or Duck Hunt. The name itself, 72pins, comes from the circuitry that connects an NES cartridge to an NES console. Longtime gamers will remember these pins as the part you had to blow into in order to make your aging games work properly.

GamesBeat sat down to talk with 72pins Co-Founder and Creative Director Pauline Acalin to discuss the process from beginning to end, potential copyright issues, and when we’ll be seeing that Half-Life cart we’ve all been waiting for.

GB: How did the idea come about?
Acalin: I believe the exact words were, “How cool would it be if …”

GB: Can you talk about your starting budget for 72pins?
Acalin: Our initial idea was to see if we could create and sell around 100 carts on a budget of $2,500. This included the domain, Big Cartel marketplace fees, carts, vinyl, shipping setup and marketing. After we made a few samples, the ideas just started flowing and we got caught up in things. 100 went to 200, then 300 then 500. 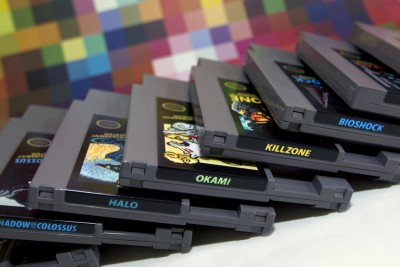 GB: What were some of the main concerns early on and how did you address them?
Acalin: The main concern was to have something as close to the look and feel of the original that would give us a vivid canvas. After a few months of trying out various print combinations, we found something which we thought would look great and also be durable for years. We knew creating limited edition art wouldn’t be cheap to produce because we weren’t going to get any volume discounts printing only a handful of each design. Everyone thinks that it is easy to find hundreds of super cheap 25-or-more-year-old NES carts consistently. That just isn’t the case at all, unless you are willing to spend ‘mint condition’ prices at game shops or drive from flea market to flea market hoping to find a handful of quality carts. We were trying to produce cool art pieces that anyone could afford. That was tough at first, considering that over 25 percent of the carts we would bulk order just didn’t meet the standards we wanted for our canvases. We even looked at injection molded carts but realized that what we were creating was more about the art than the canvas.

GB: How did you come to the $16 price point? Do you find most people see that as too high, a great deal, or just about right?
Acalin: Our intention was to have a low price point, and $16 is pretty low. By that, I mean it’s enough to cover cost of the product itself and still be able to support the artist for their design. We didn’t think that people would question buying original art as a high quality print for $15 to $20, so we chose to go the more labor intensive route and use cartridges as the canvas simply because we thought it would have a more nostalgic feel to it and probably be a better conversation starter. We are not out to make a lot of money by any means … we just wanted to have a neat product. I know it sounds weird, but it’s true. A common correction we have to make to the few price scoffs we do get is that, we are not printing these on a home printer, or at a volume where we are able to get a deal on cost. They are professional grade vinyl on actual working NES carts, with many, many hours of design work on them. Overall, we get tremendous support from most everyone, and that makes us happy. We also promote sales and coupons on our blog and Twitter.

“We are not out to make a lot of money, by any means…we just wanted to have a neat product. I know it sounds weird, but it’s true.“

GB: What is Big Cartel, and how do they factor into 72pins?
Acalin: During the phase of researching a marketplace to house our store, we decided to go with Big Cartel. All of our payment processing is done though them, and it really has made things much easier for us. While the default customization on Big Cartel might be a little limited (there are only two in-house theme styles to choose from and one would not work), the ease of use, price and reliability have been great.

GB: How does the art and manufacturing work?
Acalin: We currently have six artists working with us, and each has a different style. In the near future we will be releasing non-8bit designs to our store, which is exciting. As far as design goes, we have a template that each artist uses as a base. We basically have a hefty list of games, and the artist just chooses from that list. Whatever inspires. The NES original “black label” design has a very limited canvas, and so each game design is somewhat of a puzzle. But once that basic design is laid out, we fine-tune it to death … send it around, give each other feedback. We have a great team and all work incredibly well with constructive criticism. Once finalized, we send it to print in a limited quantity. Once we get them back, they are applied to refurbished cartridges, along with the accompanying customized vinyl for the back (which is different for each game).

GB: It seems like there would be some major copyright issues to overcome. Can you talk about that?
Acalin: There actually have not been any issues. We have received positive feedback from several of the publishers and developers, some having commissioned us to design additional game art, or create more of an existing design.

GB: What are some of the most popular carts you sell?
Acalin: Bioshock, Halo and Katamari sold out immediately upon release and are constantly being requested. 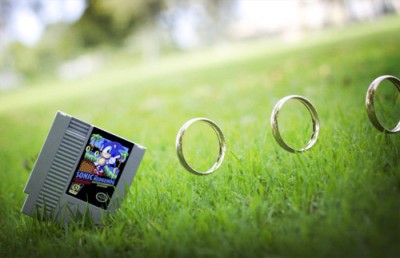 GB: What are some of the most common requests you get?
Acalin: We are in the process of getting to each request in turn, the most recent being a Blizzard Series, including World of Warcraft, StarCraft and Diablo. In the works are Assassin’s Creed, Uncharted and Mass Effect … and several others.

GB: Which carts aren’t quite as popular as expected?
Acalin: We really haven’t had any bad luck with any particular design. Some have sold out at the speed of light, others start out slower but then have a surge in sales. We have no idea what to attribute that to; we’ve just been fortunate.

GB: Who is your average client?
Acalin: Overall, we really have no way of knowing, since we don’t track that info or ask for any personal information. But the range of responses we get from our customers lead us to believe they range across the spectrum … from fans of a particular game, to diehard NES retro folk (such as myself) … and even a couple people who just want to collect every single design we release! Amazing.

GB: Will you be adding different types of cartridges (Genesis, TurboGrafx-16, etc.)?
Acalin: We are totally open for trying out a new canvas to design on. If the demand is there, who knows.

GB: Where do you see the site going in the long-term?
Acalin: We really want our focus to be custom design … birthdays, weddings, parties/special events, awards, etc…. We have already created several designs for clients wanting NES carts for product and self-promotion, awards and television programs … and those are a whole lot of fun to work on. It’s something we hoped would happen.