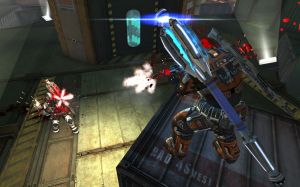 “NHN grants Aeria Games the first right to review and obtain, with preferential treatment, all MMO games that NHN has obtained licenses to, whether through its wholly-owned or partially-owned studios or third-party studios. The transaction also includes two licenses from NHN’s lineup,” said Aeria chief executive Lan Hoang (pictured below). The press release lists the two games as shooters Alliance of Valiant Arms (A.V.A.) and Soldier Front.

Hoang said that Aeria has been profitable to date and that the investment is the first fundraising the company has done from an outside investor. “The key for us is the acquisition of Ijji and the content agreement. The additional resources will be used to acquire Triple-A titles and aggressively expand our platform to the mobile gaming market, with a focus on our core audience of mid- and hardcore gamers, aka our power players. We will be launching through our platform a number of multi-player games for the smartphones and the tablets in the very near future,” he said.

The Ijji acquisition will add about 10 million plus users to the Aeria’s current 35 million core players. The company has a number of online games, including the MMO Eden Eternal, the MMORPG Shaiya, the supernatural MMOFPS Wolf Team, the strategy game Golden Age and an upcoming action shooter named Repulse.

“The shooters community, which Ijji is really known for, is probably one of the most hardcore and loyal gaming communities,” Hoang said. “Our audiences are very complementary, so it’s a good fit and one that will help to further foster an even more active community amongst Aeria Games users.”

Aeria Games, founded in 2006, has offices in the US, Germany and Brazil, publishing in nine languages across 30 countries.

NHN Corporation, established in 1999, is a multinational Korean internet company, operating a Korean search portal with more than 17 million unique daily visitors as well as a game portal, Hangame, which reports $422 million in revenue last year, from over 30 million registered users.