Apple has offered many copycat games on its iTunes App Store for years, but decided to pull a number of apps in December due to copyright infringement complaints by Atari. The heavy-handed approach surprised many in an industry where new products traditionally draw from design features and concepts of previous games.

The creator of Vector Tanks, the iOS action game removed from Apple’s App Store on request by Battlezone intellectual property owner Atari, spoke to VentureBeat about this in an exclusive interview. Peter Hirschberg, the creator of Vector Tanks, is an industry veteran who collects arcade machines and has contributed to several game emulators. In the mid-1990s he came up with a translucent vector effect algorithm that replicates the glow effect of vector graphics arcade machine screens on computer monitors. 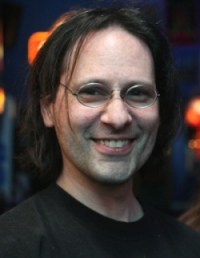 In 2009 Hirschberg created Vector Tanks for the iPhone in the hope of catching Atari’s attention, as he phrased it: “I ran up on stage before the big huge popular band starts playing, grabbed the guitar and did a really awesome lick and I was hoping they’d go: Dude, you’re totally in the band now. And instead they kicked me out of the show.”

Hirschberg said that he wanted Vector Tanks to be evocative of the 1980 Battlezone arcade game, but deliberately avoided making it a straight clone: “I used to say: They can’t come after me for a game of tanks drawn of lines, because that was the only similarity that I saw. That’s why I put jeeps in there, helicopters and power-ups – it was not supposed to be Battlezone. Every time I found myself steering into Battlezone territory I would purposely turn the other way.”

Asked by VentureBeat about the situation, Atari issued this statement: “Working with the independent developer community is at the heart of Atari’s mobile business model. Both Asteroids: Gunner and Breakout: Boost are the first of several products from that strategy. Unfortunately not all games that are brought to us meet the innovation standards that our consumers expect. In the case of Vector Tanks, we spoke with the team on a number of occasions over a period of several months and ultimately determined that it was not a good solution for our Battlezone franchise.”

Atari, in fact, is much smaller than it used to be and, after a number of asset sales and restructurings, has about 50 employees and a relatively small legal department. It’s not necessarily one of the giant companies that can throw its legal muscle around, and, because of its smaller size, it actually needs to tap outside developers to do a lot of work.

But nobody ever spoke to Hirschberg when he originally reached out to Atari in 2009. The talks only happened in late 2011 after Black Powder Media had acquired the Vector Tanks rights from Hirschberg, who is now working as a programmer for Electronic Arts.

Black Powder Media’s Scott Barrett recalls the communication, which even included Atari co-founder Nolan Bushnell at one point: “On Oct. 26, 2011, Apple contacted us to let us know Atari claims infringement. We responded to Apple, denying any infringement and told them we’d be in touch with Atari. We then called Nolan Bushnell who suggested we make Vector Tanks an official Battlezone title and then put us in touch with Atari.”

The conversation continued for almost two months and Atari initially seemed to be open to the idea of working with Black Powder Media on the project. But a second notice was sent to Apple from Atari, stating that no agreement had been reached. Two days after that Apple pulled the Vector Tanks apps. “We have sent emails to both Atari and Apple but have heard nothing from either since.”, concludes Barrett. 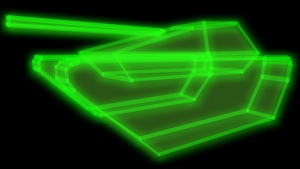 Historically video games have always been a medium where game design ideas and art styles are adapted and refined from one title to the other. Far more prominent releases than Vector Tank have remained unchallenged for drawing inspiration from other IPs. The dual-stick vector shooter Geometry Wars is hard to imagine without the influence of Atari’s Asteroids. Indie game ‘Splosion Man was “ripped off by corporate giant Capcom” for the iOS release MaXplosion.

Gameloft, one of the leading game publishers for iOS and Android devices, has been releasing a string of hits that take a cue or two from other IPs (for example, NOVA smells of Halo and Starfront: Collision shares certain similarities with StarCraft). 6waves Lolapps recently released its Yeti Town mobile game and drew askance looks from those who thought it resembled Spryfox’s Triple Town on Facebook.

“With graphic design, a large element of videogames, the line of homage/theft/borrow/ steal/share/evolution is as blurry as they come.”, notes Black Powder Media’s Scott Barrett. He also suggests that the playing field is uneven, with small indie developers being more prone to legal challenges than larger game publishers: “Both Atari and Apple know the cost for us to legally fight would overshadow any income the title could generate. I rather doubt if a little publisher drafted an infringement claim to Apple about one of Atari’s games that Apple would pull the title without the indie dev providing an official legal ruling.” 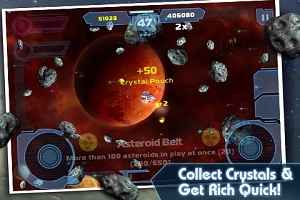 Art Currim from Black Powder Media adds: “Ultimately, we are placed in an un-winnable position on paper. Apple can delete our game at any time. Atari can insist it’s a copy of their game. We’re not accepting that it’s similar enough to justify the copyright infringement claim.”

Hirschberg said he continues to be an admirer of Atari’s classic games, but is doubtful whether the company’s current strategy is doing the retro games market a great service: “If they [Atari] are gauging success by their current offerings (Breakout: Boost and Asteroid: Gunner, et al), I think they are both going to continue to sully these treasured classic games and alienate the inherently niche market for any future offerings.”

Vector Tanks Extreme sits at an aggregated Metacritic review score of 81 (out of 100), compared to 69 for Atari’s recent release Asteroids: Gunner. Vector Tanks also received a 5 star review by none other than Ed Rotberg, the programmer of the 1980 Battlezone arcade machine.

We have asked Apple to clarify the reasons for the removal of Vector Tanks from the App Store but have not yet received an answer.