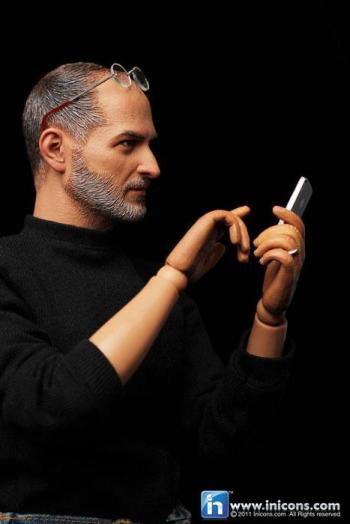 The creepily lifelike dolls were slated for a late February 2012 release and were set to sell for $99.99 plus shipping.

The Telegraph reports that Apple has written a letter to the manufacturers of the doll, stating that any action figure depicting the Apple logo, Jobs’ name, his appearance or his likeness is a criminal offence.

The “Super Realistic Steve Jobs 12-Inch Collectible Figure” was announced on January 1, 2012, as a joint venture of toy companies In Icons and Dragon in Dream Corporation.

The complete action figure set was to feature Jobs’ signature get-up of a black turtleneck, blue jeans and sneakers, along with two pairs of glasses, a black leather belt, a pair of black socks, two apples and a “One More Thing” backdrop.

Back in 2010, Apple managed to block the sale of another company’s Jobs doll. While the “SJ” action figure is no longer on the MIC Gadgets store, you can still buy “Poking Inventor” Mark Zuckerberg action figures for a cool $200.