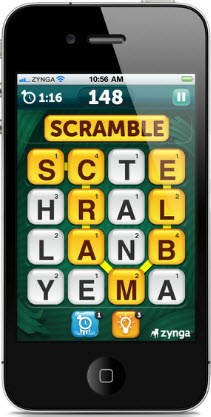 Some of the most popular mobile games are simple ones. With that in mind, Zynga is launching Scramble With Friends on the iPhone and iPod Touch today.

The game is part of Zynga’s strategic expansion into mobile games, a market where its social chops can be an advantage. But Zynga faces stiff competition in the mobile market and has far less market share in that segment than it does as a dominant player on Facebook. Zynga launched seven mobile games last quarter.

The game is a fast and fun social word puzzle game that is the latest installment in Zynga’s “With Friends” mobile social apps. In the game, you look at a four by four grid of letters and use your finger to unscramble as many words as you can see in the grid. The fun part of the game is challenging a friend to a match and taking turns to find as many words as you can within 2 minutes. The challenges last for three rounds and the one with the most points wins. You can take your turn at your own leisure, as the play is asynchronous, where one player moves at a time. 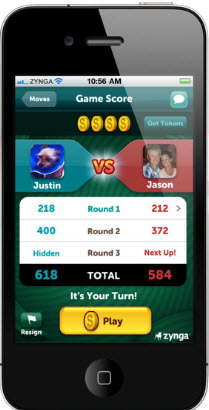 Ya-Bing Chu, general manager for the game, showed me a demo. You can start a game by challenging a friend and making your move. When you complete it, your friend gets a notification to take a turn. In the first round, you get standpoint values for each letter scored in a word. In round two, you can can double down, where you get double letter and word values for certain highlighted letters. In round three, you get triple letter scores when you score Triple Crown letters in a word.

You can use Power-Ups before each round that give you special abilities. With the “freeze,” you can stop the clock and get more time. With “inspiration,” you get some hints for three words you haven’t found yet. And with “scramble,” you can get a new view of the game board. You can send in-game chat messages and view a variety of “With Friends” apps at the bottom of the screen so you can see which games have pending turns.

You start each match with tokens that are replenished over 20 minutes, but you can buy tokens and use them to get additional power-ups. In the free-to-play version of the game, you get seven tokens and view ads in between rounds. If you pay $2.99, you get more goodies and don’t have to view the ads.

Chu says the game has immersive audio and visuals and good tactile feedback. 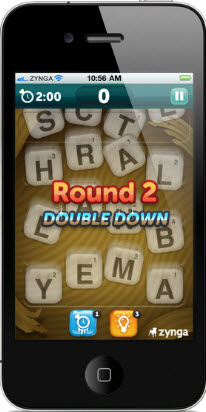 But this game was made by the San Francisco With Friends mobile game studio, in consultation with the team at the Newtoy studio. The game was based on an earlier Zynga title called Scramble, which had a kind of cult following. One fan, Manoj Saranathan, drafted a petition beseeching Zynga and Facebook to keep it going. But Zynga zapped the game on Sept. 30 on Facebook and now it’s available on mobile.

The Scramble With Friends game will be out on Android and the iPad later. Overall, Zynga is on an accelerated pace for introducing new games not only on mobile devices but also on Facebook. It introduced Hidden Chronicles on Facebook this week.