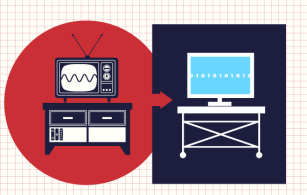 There was a time when little Bobby would get up to turn the television to one of the three available channels when the family got bored. If you missed the Ed Sullivan show that night, too bad, go play chess.

Nowadays, people miss shows on purpose so they can watch them on their time, on the device of their choice. There’s none of this gather the family around the tube for a little late night Lawrence Welk. Now even my grandma is surfing YouTube for variety show reruns on her iPad. The infographic below shows she is far from alone. In fact, 1.2 billion unique viewers watch videos online in October 2011.

Indeed, watching video online is better for money makers as well. After introducing video to its customer service offerings, Dell reported a 5 percent decrease in service call volume. Considering how time consuming these calls can be, employee time can be reallocated into something more financially efficient, changing the bottom line.

There has been a push amongst major media companies for a new type of entertainment delivery: TV Everywhere. TV Everywhere is the idea that people should be able to bring the living room with them, watching shows and movies on their time and their dime. This new push has inspired big industry deals. Disney and Comcast recently reached an agreement to bring Disney’s properties to any Comcast Xfinity subscriber’s device of choice. Other companies such as Netflix are moving their products toward streaming, and putting less emphasis on physical DVD rentals. Physical deliveries put limitations on where you can engage with content, which is the opposite path media companies want to take.

Interestingly, however, it seems how your media provider started out dictates what type of video entertainment people will watch on your service. For instance, Netflix began as a DVD rental unit — a faster, easier, to-your-door alternative to Blockbuster. Perhaps because of its early ties to the DVD industry, more than half of Netflix subscribers watch movies. On the other hand, Hulu was born out of the YouTube category, where people flocked for quick snippets of video. Now a whopping 73 percent of Hulu-goers use the service specifically for watching television shows.

These services are changing what the living room looks like. It’s no longer a couch, recliner and remote, but can also be a doctor’s waiting room, subway train or park. Check out what else is happening as entertainment moves from silver screen to big screen to portable screen in the infographic below: