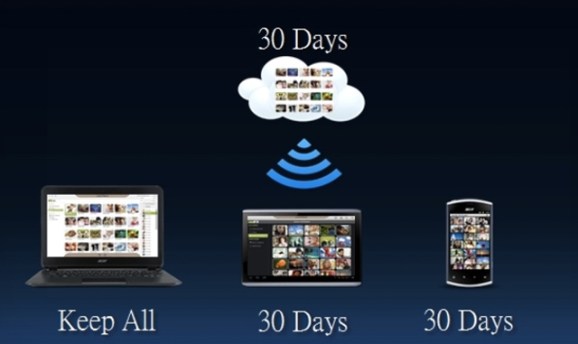 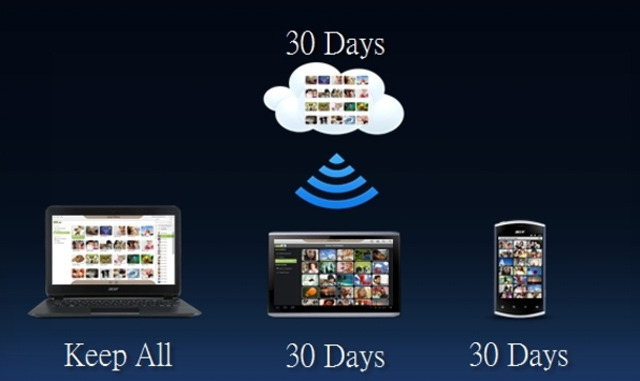 Acer will launch a new iCloud-like service called AcerCloud in the coming months that will connect content on Acer laptops, Android phones and other PCs, the company announced today in Las Vegas at CES.

We predicted that consumer cloud services would be a major trend this year in our CES 2012 preview. Apple often sets the agenda for the year with its own products and services, so when the company debuted iCloud and iTunes Match in the middle of last year, it was only a matter of time before the competition cooked up something similar.

Acer’s AcerCloud service on its face sound a lot like iCloud. The company said the service “securely connects all personal smart devices for anytime, anywhere access.” Basically, if you take a picture on your Android smartphone, it will be available on your Acer notebook automatically or with a single click.

AcerCloud will store photos and documents for 30 days. During that time, an AcerCloud-connected PC can backup and access the images and documents as needed, making it an easier process for moving around and managing your media.

The AcerCloud service will begin showing up on Acer laptops and PCs in the second quarter of this year, and worldwide availability is expected in the fourth quarter. The company likely hopes its cloud offering will help set its products, such as its Windows-based ultrabooks and Android tablets, apart from many similar ones.