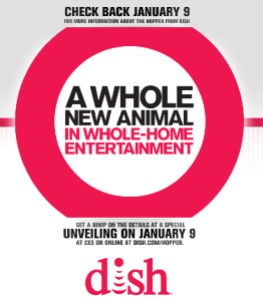 Satellite provider Dish Network might unveil a broadband satellite service and a new home DVR solution called the “Hopper” at CES Monday, according to leaked reports.

The Hopper DVR will work across multiple rooms, allowing you to stop a show in one part of your house, and pick up where you left off in another. It will have three tuners: the 2 terabyte main unit acts as a server, and two extender units, called “Joeys,” stream recorded content to other sets in the home.

In addition to a revamped user interface, the Hopper will have a feature called PrimeTime Anywhere that can automatically record primetime programing on ABC, NBC, CBS and Fox.There’s a placeholder set up for the Hopper on Dish’s website, that touts a “Whole new animal in whole-home entertainment.”

The DVR rumors first surfaced when blogger Dave Zatz wrote about an article that appeared on TWICE early, before being removed. The broadband details were in an article in the January issue of Dealerscope magazine, which has also been yanked.

Zatz also says Dish will announce a rebranding effort at CES, dropping the “Network” from its name and getting a new logo.