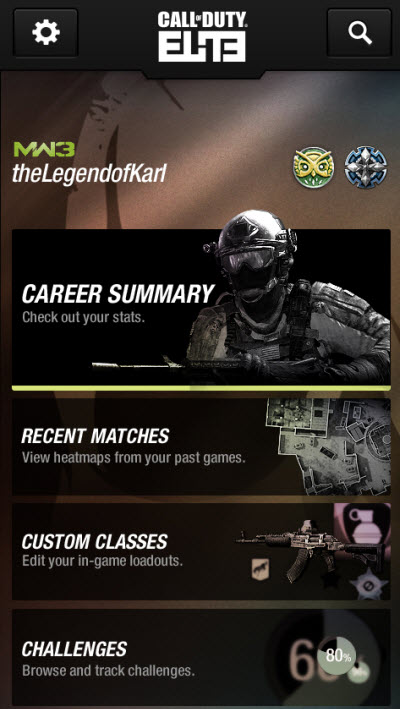 Game maker Activision Blizzard is finally launching a mobile app for its Call of Duty Elite service. Now fans of Call of Duty Modern Warfare 3 can engage with the game and the social networking service built around it via the iPhone, starting on Tuesday.

The iPhone version of the service includes a subset of the services available on the gamer social network, which has been available since November on the Xbox Live online service and the PlayStation Network. The mobile service was originally planned for November, but it was postponed as Activision worked through issues associated with having too many users at the outset. Activision has since caught up with the heavy traffic, rolling out the full console service and now the mobile app.

“We’ve always viewed mobile as a big part of the mission of Call of Duty Elite,” said Chacko Sonny, head of Beachhead Studios, the division of Activision that created the Call of Duty Elite service over the past two years, in an interview. “You can have your Call of Duty Experience be with you no matter where you are.”

As you can see in the screen at the right, the service lets you access  a lot of the same information you can on the console versions. You can see your career stats in Modern Warfare 3 multiplayer and view your performance in recent matches — including heat maps that show where you got killed in the multiplayer maps.

One of the more social things you can do is look up the stats of a friend, as long as you know their game handle, or Xbox Live gamer tag or Sony PlayStation Network ID. You can drill down on the results of games and the scoreboards and then view the “player cards,” which have information about players in the matches.

The service also lets you edit your “custom classes,” or the kit of weapons that you take into battle. You can use the mobile app to edit your in-game loadouts (weapons, grenades, attachments and special capabilities). After you save the changes, the edited custom classes will show up the next time you log in on the console and play the game. This is where the mobile app allows you to influence the experience you have within the game.

You can also browse through the available multiplayer challenges and track them via the mobile app. And you can study what you still need to accomplish in the game, such as which weapons will earn you the most experience points.

This app is just the kind of thing that Call of Duty addicts need to get them through the day when they’re traveling or away from the console. You could be flipping burgers at your day job at Burger Town while looking at your Modern Warfare 3 stats in the other hand.

There are some things associated with Call of Duty Elite that you can’t do on mobile. That includes watching videos. Modern Warfare 3 is the most popular video game in history, with more than $1 billion worth sold in the first 16 days after it debuted on Nov. 8.

The iOS version is debuting on Tuesday and an Android version will follow a week later. You can use the iOS version on the iPad, but Sonny said that the company is also working on a tablet-specific version. More features will be added later on. The app is free and you do not have to be a premium paid member of the Call of Duty Elite service to use it. As for the Elite service overall, Sonny said, “The issues associated with the heavy load are behind us. The service is operational and lots of people are using it every day.”