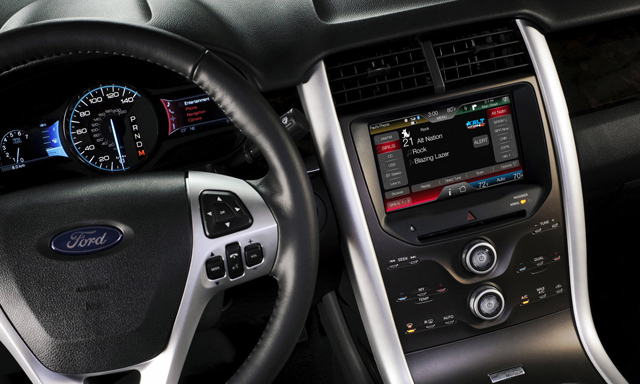 Ford’s in-car computer, Sync, is now installed in 4 million vehicles. To celebrate the milestone, the car company has added new abilities including hands-free voice navigation from Telenav and on-demand access to National Public Radio programs. The company announced the milestone and new apps at the Consumer Electronics Show Monday in Las Vegas.

In-car technology was one of the five big CES trends we predicted that would matter in 2012. Car markers, especially Ford, are racing (har har) to add connectivity and apps to their vehicle dashboards. Mercedes-Benz is expected to announce new in-car tech at CES as well.

Ford’s voice-activated Sync connectivity system was introduced in 2007 in the U.S. and lets smartphone owners do more with their cars by “syncing” with various smartphone apps. Ford will be bringing Sync to European and Asian models this year, and it believes an additional 9 million vehicles will be Sync-equipped by 2015.

One new Sync addition is a feature that lets drivers listen to National Public Radio programs and stations on-demand. Drivers will be able to piece together playlists comprised of programs such as Fresh Air, All Things Considered and Morning Edition using their voices. Just download the NPR smartphone app and you can begin to use with it Sync AppLink, which already works with Internet radio apps like Pandora, Slacker, iHeartRadio and Stitcher.

Ford also has updated its Sync Destinations mobile app, which lets drivers send all their destinations to their vehicle using the iPhone. The app now has added AppLink capabilities, and it can give turn-by-turn directions and it let drivers report traffic incidents in real-time. The Sync Destinations app will hit the BlackBerry and Android platforms before the end of Q1 2012.

Another upcoming addition to Sync is the ability to work with the new Scout navigation app by Telenav. The Scout app is available now for the iPhone and provides personalized navigation, turn-by-turn directions and traffic-based drive times. The Scout app will work with Sync later this year.