Twitter is getting to be kind of a big deal globally, at least among marketers and the digerati.

But in Japan, the microblogging service already trumps Facebook in traffic.

Still, until recently, neither site has been as big in the region as Mixi, Japan’s homegrown and highly popular social network. While we don’t have data for monthly uniques, Mixi had around 27 million users as of April 2010.

Depending on how much Mixi has grown since then, it’s entirely possible that Twitter could now be the country’s largest social network.

Twitter launched in Japan almost exactly three years ago, largely in response to the popularity of Japanese Twitter clones. The company included support for the Japanese language a few months later.

In fact, Japan is one of seven markets in the world where Facebook is not the leading social network (other areas on this short list include Vietnam, South Korea, Poland, China, Russia and Brazil). 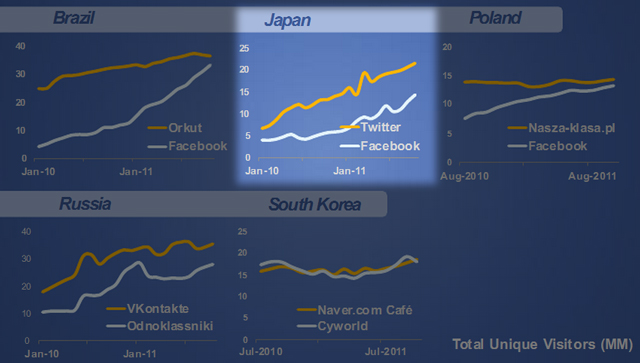 Facebook’s lack of popularity in Japan is old news, though. Japanese participants in a study last year said they thought Facebook was less secure and more complicated to use than the alternatives.

Also, we have to remember the Japanese culture values anonymity — a commodity you won’t find anywhere on Facebook, which is committed to real-world name usage and pictures of users rather than avatars. On Twitter, anonymity is not a problem; in fact, some of the most politically and socially interesting uses of the network have required anonymity, and Twitter allows and encourages such uses.