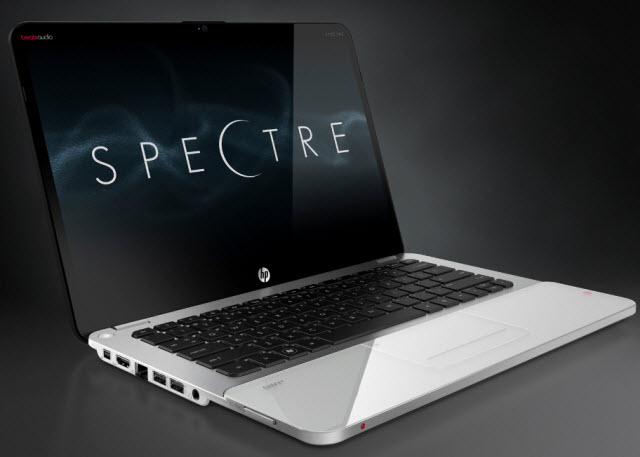 Hewlett-Packard has designed a cool laptop that even Apple aficionados might admire for its creative use of glass materials. The new Envy 14 Spectre is a beautiful new 14-inch Ultrabook with a cover that is made out of durable glass.

The cover of the sleek laptop, known as an Ultrabook for its thinness and responsiveness, is made out of Corning’s Gorilla Glass, a damage resistant glass that can be used to protect the screens of smartphones, tablets, PCs and TVs. But the laptop isn’t convertible into a tablet computer. You open it up and it looks like any other cool and thin Ultrabook. The laptop carries the Envy brand, created by HP’s (now-defunct) Voodoo PC division, to catch the enthusiasm of hardcore users.

“We think this has shock appeal and everything that an Envy user wants,” said Page Murray, vice president of marketing in HP’s personal systems group. “It has fantastic no-compromise performance.”

The laptop is so cool that it will be highlighted at a couple of keynote speeches at the Consumer Electronics Show — Microsoft CEO Steve Ballmer’s opening keynote on Monday night and another keynote by Intel CEO Paul Otellini on Tuesday. 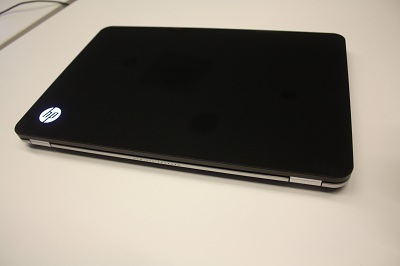 The high-definition HP Radiance (1600 x 900) display has an intensity of 300 Nits, a measure of brightness, which makes it about 50 percent brighter than similar screens. It also has nine hours of battery life and a row of slots for connecting various devices (HDMI, Ethernet, USB 3.0, mini DisplayPort, and headphones). It has an HD webcam and HP’s signature Beats Audio technology. On the side, it has a roller that can be used as an analog control for changing the sound volume. It also has a mute button on the side for when you need to stop the music fast.

The screen has a wide viewing angle. And the screen’s not the only part of the device protected by Gorilla Glass — there are a couple of slabs of glass on the palm rest of the computer. The keyboard is raised slightly so that you can really feel the keys when you type. And each key has an individual light-emitting diode (LED) light. The touchpad has pinch and zoom or rotate functions. The glass looks cool and will appeal to fashionistas, but you’ll have to keep wiping your fingerprints off the cover to keep that cool look.

The machine comes with 128 gigabytes of flash memory and Intel’s Rapid Start technology. That means you can tap the screen and turn on the machine instantly, without having to wait for a hard drive to spin up. HP has an 800 number for concierge-style support service. It also comes with Adobe Photoshop, Adobe Premiere Elements, and two years of Norton Antivirus protection. It uses Intel’s Core i5 or Core i7 microprocessors and will ship on Feb. 8 for $1,399 in the U.S. You can double the flash memory to 256 gigabytes as an option. It comes with four gigabytes of main memory, expandable to 8 gigabytes, and it has built-in WiFi.

That’s a high-end Ultrabook, as many others will be cheaper. But it’s not as expensive as other laptops on the market. The height is 20 millimeters and it weighs 3.79 pounds. It has HP’s CoolSense technology, which slows the processor down and keeps the machine from getting too hot if you are using it on your lap.