“Last night @TimTebow lead the @Denver_Broncos to an overtime playoff win and a new sports Tweets per second record: 9420,” Twitter tweeted this morning. 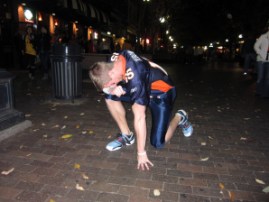 Above: Not Tim Tebow

The Denver Broncos, which pulled Tebow onto the team immediately after his college career, won Sunday’s playoff game in overtime, sending the Steelers back home to Pennsylvania for the season.

The quarterback has gained attention for his team not just through his performance, which is thought to be underdeveloped by some, but also for his religious fervor. Tebow often thanks God by kneeling in the Thinker position at the end of Bronco football games. The action has inspired a small Internet meme known as “Tebowing,” where people kneel down with a fist to their forehead, imitating a move Tebow makes in most of his games (see photo right). Saturday Night Live has also had a bit of fun with Tebow.

Given his virtual popularity, his win on Sunday caused fans and foes alike to swamp Twitter with Tebow commentary.

Other than Tebow, the all time record holder of the most tweets per second is a Japanese show about sky-bound pirates, called Castle in the Sky. The December 9th screening of the new show set off a major 25,088 tweets in one second. Prior to that, Beyonce’s baby announcement at the MTV Video Music Awards earned her 8,868 tweets per second (TPS). The music star just gave birth to her baby today, so perhaps we’ll see a new record tomorrow.

Other big tweets per second holders include the 2010 Japanese New Year celebration which topped out at 6,939 TPS, the death of Apple co-founder Steve Jobs which inspired 6,049 TPS, the death of Osama Bin Laden at 5,106 TPS, and the 2011 earthquake that hit Japan in March got 5,530 TPS.