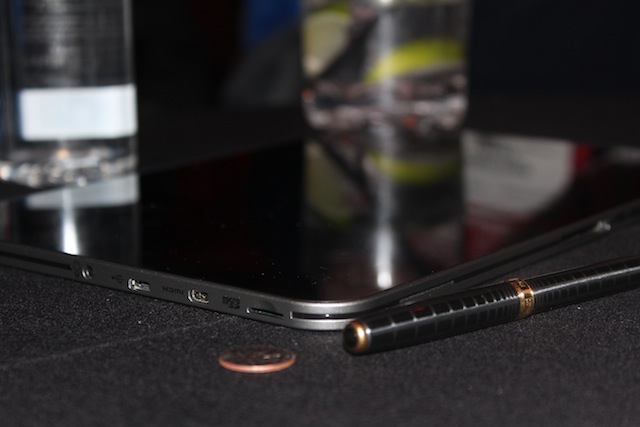 Toshiba amazed me with its Excite X10, a very slim Android tablet that the company claims is the thinnest and lightest tablet on the market.

I don’t know if that claim is true, but it felt amazingly light and trim in my hands. At 0.3 inch thick and just 1.18 pounds, it’s certainly one of the most svelte tablets on the market.

An unusually comfortable textured magnesium alloy makes up the device’s back. Inside, it’s running Ice Cream Sandwich (the latest, tablet-oriented version of Google’s Android operating system) on a Texas Instruments OMAP system-on-a-chip. Despite its thin profile, the company has found a way to include micro USB and micro HDMI ports as well as a micro SD slot, plus a dock connector. One thing it lacks is 3G, however: Only Wi-Fi models will be available when the Excite X10 ships in late February. A model with 16GB of storage will cost $530, the 32GB model will go for $600.

Toshiba’s not skimping on the engineering to make things skinny this year. The company also showed off a 0.63-inch-thick ultrabook, the Portege 2830, that weighs just shy of 3 pounds. It has USB, HDMI, RGB ports and even an RJ-45 port (that’s for the Ethernet cable, for those of you who have long been living in the wireless world).

To help make the most of its engineering, the company created an ultrabook encased in clear plastic so that, like the Visible Man, its internals could be seen. Like Apple’s Macbook Air, the Portege 2830 has a shrunken motherboard, which appears to take up less than a quarter of the computer’s footprint. That leaves plenty of room for cooling, decent speakers, and even standard-sized memory, which helps keep the price down. The Portege 2830 will sell for $800, the company said.