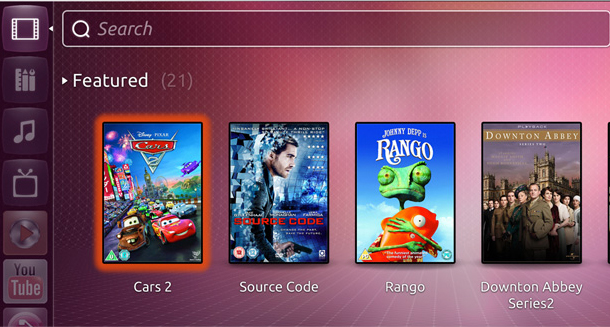 Joining the ranks of Apple and Google, Linux is entering the TV market with an Ubuntu TV. Canonical, the team behind the Linux based Ubuntu operating system, debuted the Ubuntu TV at CES on Monday.

No wires, no boxes, no remote is the mantra of the Ubuntu TV. Controls will be touch and gesture based, with the ability to use a smartphone as a remote as well. Of course, the TV will connect to cable and broadcast signals, but all the snazzy features that Internet TVs are known for will also be included; DVR abilities, access to online movies and TV shows, streaming capabilities and apps. To find all of the content you heart can desire, Ubuntu TV will use intelligent search that will also give you suggestions based on what you watch. And of course, what Internet TV would be complete without cloud capabilities? Ubuntu One, Ubuntu’s own cloud, will be built into the new TV so users can watch their movies and TV shows stored on other devices.

True to Linux’s nature, Ubuntu TV’s operating system will be free. However, manufacturers will have to pay Canonical a service fee for each unit. Whether or not this will keep the price low enough to be desired by consumers is to been seen. And who knows, TV manufacturers may pass it over in favor of Apple and Google backed projects.

Ubuntu TV’s success likely lie in its adoption by more tech-minded consumers who enjoy using Linux-based operating systems. Most consumers will gravitate towards big names like Apple and Google for their familiarity and ease of use when choosing an Internet TV. I, for one, am excited about the possibility of a Linux-based TV; excuse me for a second while I geek out.