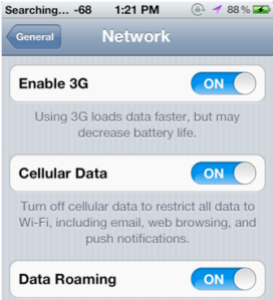 Apple has restored the 3G connection toggle switch setting in the latest version of its iOS 5.1 beta, which many people with spotty 3G coverage will probably appreciate.

The current version of iOS only allows device owners to toggle off Cellular Data usage rather than choose between an Edge network connection or the faster 3G connection. If you’re in an area with a crappy signal most of the time, it’s helpful to be able to toggle off the 3G connection rather than suffer from having your device switch back and forth, which (in my experiences) takes much longer than simply using a slow connection.

I’ve also noticed that my phone will occasionally drop all internet connectivity without any notifications — meaning it just keeps waiting to load without ever producing anything. It’s especially annoying when relying on app notifications to keep you informed. In the past, toggling the 3G switch off and on fixed the problem, but my only alternative now is to restart the phone or find a WiFi connection.

The iOS 5.1 beta 3 (build 9B5141a) is available for download now via an over-the-air update or general download at the developer portal.