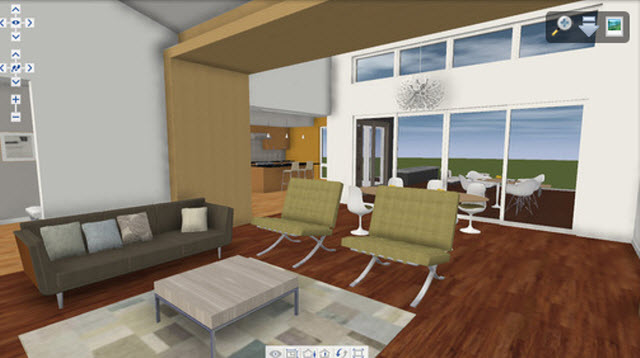 It’s getting a lot easier to design your own home with a computer. A case in point is the Blu 3-D Configurator from Blu Homes, which simplifies home design to the point where regular non-architects can design their own homes with online tools.

The Blu 3-D Configurator is just the latest example of 3D graphics technologies developed for games finding new uses beyond the entertainment market. Blu Homes is announcing at the Consumer Electronics Show in Las Vegas that a Massachusetts couple, Cathy and Walter Pearlman, designed their own two-bedroom home entirely by using the Blu 3-D Configurator. Once the design is complete, Blu Homes assembles the parts and ships them to the customer for assembly into a house.

The company turns the 3D designs created by users into actual homes. You can create your own or personalize a model made by Blu Homes’ architects and then fly through the home to get a feel for the actual layout. The hope is to revolutionize the way homes are built. You can go hang out in your home or redecorate it — before you ever set foot in the real thing. You can also get a real-time view of the costs that result when you make changes to the design — a feature that will be available in a few months.

Blu Homes builds a home based on the client’s 3D custom model, using precision tooling and trained craftsmen in a climate-controlled factory in Vallejo, Calif. Blu Homes was founded in 2008 by Bill Haney, an environmental engineer, and Maura McCarthy, a venture capitalist with a background in modular housing. Blu Homes has seven eco-friendly architect-designed homes dubbed Elements. The Pearlmans chose one model for their home in Pembroke, Mass., with everything from exterior siding and kitchen appliances. After one meeting confirming the selections and a minor change to the bathroom title, they were ready to purchase their home at a fixed, pre-agreed upon price. The homes generally use 50 percent less energy than traditional homes.

“At first, designing our home online seemed so high-tech that it felt more like something our kids’ generation would do. Once we tried it ourselves, we realized how fun and easy it is,” said Cathy Pearlman. “It turns out designing your home online — and then having it built straight from the online designs — is something anyone can do.”

Haney, president and co-founder, says the Configurator takes a lot of the uncertainty and stress out of the home-building process for all parties. Since the tool became available in October, more than 6,000 home designs have been created and saved with the Configurator. The software is proprietary and similar to tools used by automotive and aeronautical engineers, and it takes into account complex requirements such as the kind of stress that snow could put on materials. But Blu Homes worked with user interface experts and game developers to make the designs consumer friendly.