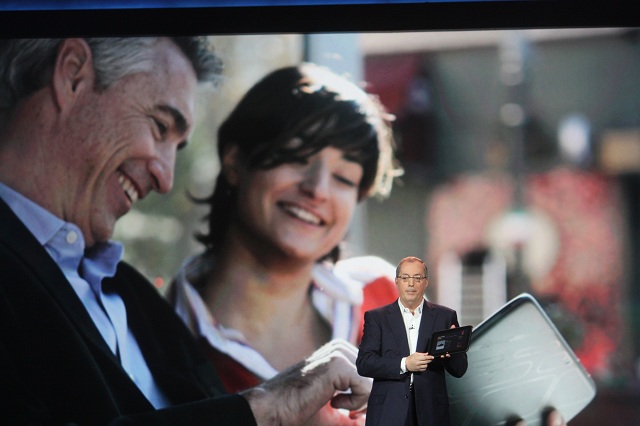 Intel chief executive Paul Otellini said in his keynote speech today that computing experiences are everywhere as consumers begin to reap the benefits of low-cost electronics that are spreading into everyday devices.

As part of that trend, Otellini showed showed off a new design for a tablet computer running on Intel’s Atom smartphone and tablet microprocessors. The upcoming 32-nanometer chip can run a tablet as well as a PC, and it will be able to run Microsoft’s Windows 8 operating system when it debuts later this year.

At the Consumer Electronics Show, Otellini said the devices themselves are less relevant, and we are moving from the era of the personal computer to the era of personal computing. Otellini, who is Intel’s fifth CEO and he has been an employee since 1974, said that the march of technology over time has been astounding.

Otellini also touted the excitement around Ultrabooks, or full-fledged computers that are thin and fast like Apple’s MacBook Air. Jeff Clarke, vice chairman of Dell, showed off a cool-looking 13-inch Ultrabook with a carbon-fiber base.

He said that devices have to be engaging and keep us with us. They have to be consistent, meaning “no compromise in quality or convenience.” Devices have to be aware of our needs and adapt to them. And they must be secure. Those are the salient features that Intel focused on when creating its specification for next-generation laptops, or Ultrabooks.

Intel plans on spending hundreds of millions of dollars on its Ultrabook marketing campaign starting this spring. That’s as big a commitment in marketing as Intel made on its famous Centrino marketing campaign from 2003, when laptops with WiFi internet were touted for the first time.

Only 10 percent of time spent with phones is dedicated to calls.