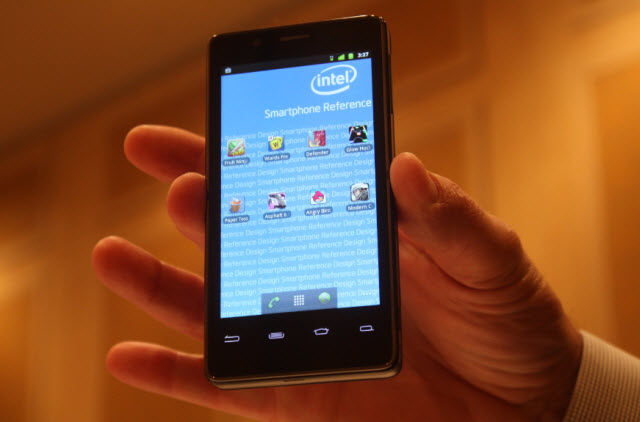 When it comes to mobile phone chips, Intel has been wandering in the desert for a while. But today at the Consumer Electronics Show, the company announced it has finally scored some major customers for its Atom family of smartphone chips, and they are Lenovo and Motorola.

Intel chief executive Paul Otellini announced in his keynote speech that Intel has lined up these customers for its code-named Medfield smartphone and tablet chips (now called the Intel Atom Z2460) that use the Atom family name and are designed with Intel’s heretofore PC-centric x86 architecture. The deals with the major players show that Intel is still a formidable force in the mobile semiconductor market, which is expected to become the world’s biggest.

“The best of computing is coming to smartphones,” declared Otellini.

Lenovo’s new Intel-based Android smartphone, the K800, is expected to debut in the second quarter on the China Unicom mobile network, according to Lenovo senior vice president Liu Jun. But the deal with Motorola, sealed by the appearance of Motorola Mobility CEO Sanjay Jha, is a big strategic partnership where Motorola will launch a smartphone with the Intel chips in the third quarter of the year. That is the first of multiple Atom-based phones Motorola will create.

On stage, Jun said Intel and Lenovo would achieve great success in the booming smartphone market. He said the phone has great battery life and no-compromise performance. 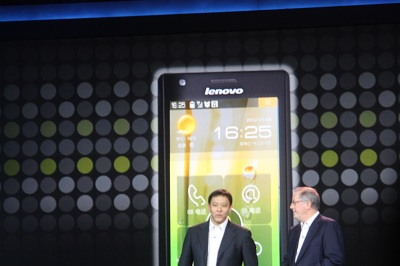 Intel has had a tough time breaking into smartphone chips because they require really low power consumption. ARM-based chips from rivals such as Qualcomm have a heritage in low power, but Intel’s x86 chips grew up in an era where performance mattered a lot more than power efficiency. Adapting Intel’s x86 architecture to the modern power requirement is tough.

Tom Kilroy (pictured below), senior vice president at Intel, said in an interview with VentureBeat Monday the company’s pitch is that Atom-based smartphones offer a no-compromise experience, where the phone is fully capable of running software that ordinarily would require a PC to run.

Intel has failed many times to get its chips designed into smartphones. Most recently, it failed with the Meego alliance with Nokia to build a mobile operating system fell apart. Since that time, Intel has allied itself with Samsung on a mobile version of Linux and with Google on its Android operating system to ensure there are mobile operating system alternatives. Kilroy said that Intel decided to create the entire design for the phone from scratch, creating a “reference design” (pictured at top) that can be easily adopted by phone device makers. He said that you’ll see the Intel-created design emerge as products in different forms this year with 4-inch screens and eight-megapixel cameras that can take as many as 15 pictures per second.

The reference design smartphone has eight hours of talk time, six hours of HD video playback, 45 hours of audio playback, support for 1080p HDMI, and many more features. It also has McAfee smartphone protection for security. 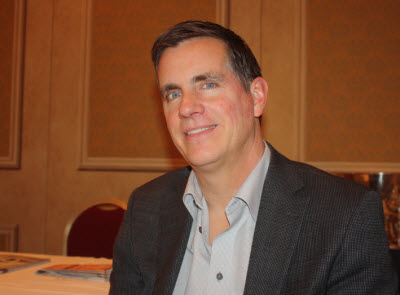 While the phone is Intel’s big strategic target, its more immediate aim is to get its Ultrabook line to take off in 2012. The company plans a huge advertising campaign — its biggest since 2003 — to convince consumers that they want the convenience and no-compromise performance of Ultrabooks with the easy-to-use Windows 8 operating system, which debuts later in the year.

“This is also a really big change for the industry,” Kilroy said.

Kilroy said the Ultrabook marketing budget would run in the hundreds of millions of dollars.

Netbooks (stripped down computers for surfing the web) have fallen by the wayside because tablets have overtaken them.

Intel will promote its AppUp download store as a place to get apps for Ultrabooks, Kilroy said.

While many vendors offered netbooks, their hearts weren’t in it. By contrast, Kilroy said there is unprecedented enthusiasm in the computer ecosystem in favor of Ultrabooks.