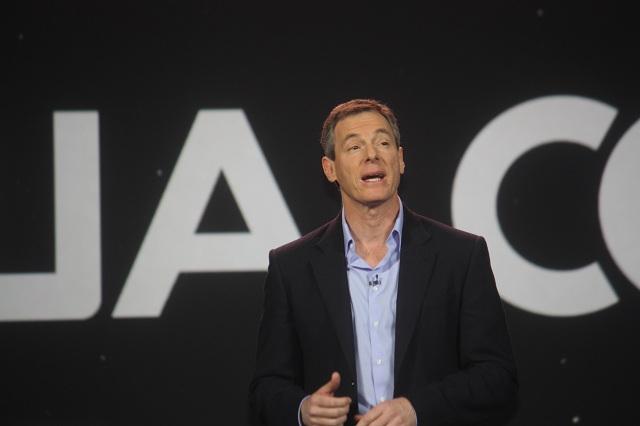 People check their cell phones about 150 times a day, or about once every 6.5 minutes. Paul Jacobs, chief executive of wireless chip maker Qualcomm, says he’s OK with that. After all, Qualcomm has 22,000 employees working on chips that make that possible.

The wireless revolution is transforming lives everywhere today and is the reason Qualcomm spends $3 billion in research and development each year, said Jacobs, speaking onstage today at CES in Las Vegas. All sorts of mobile devices are just going to work together, he said.

Jacobs said that Qualcomm has shipped more than 7 billion wireless chip sets, making it the No. 1 supplier of wireless technology. About 1.5 billion 3G mobile connections exist, and the wireless industry’s revenues exceed $1.3 trillion on a global basis.

“All consumer electronics companies are already in the mobile industry or soon will be,” he said.

Qualcomm’s Snapdragon processors are used in more than 300 devices, and 350 more are in development. Qualcomm launched an app called GameCommand for Android in hopes of encouraging gaming on top of Snapdragon-based devices. Qualcomm’s S4 Snapdragon chip set will drive the next set of devices, from tablets to Windows 8 laptops. For the first time, Microsoft is crafting a Windows operating system to run on ARM-based chips, such as the Snapdragon.

The latter, Jacobs said, is “going to be a really exciting opportunity” for Snapdragon devices and “that is a game changer.” Jacobs demoed a Qualcomm Snapdragon-based tablet running Windows 8.

Emerging countries will be 50 percent of global GDP by 2014. In India, last year, mobile connections exceeded fixed landline connections. No matter where they are, people want to join the mobile revolution and become “citizens of a much larger world,” Jacobs said.

Jacobs said that Qualcomm has launched 73 projects for social good in a bunch of countries around the world. In one of them, Grameen Bank, which makes micro-finance loans to small business owners, gives low-income businesses a phone that can be shared among a group of businesspeople. Those who stay in the program for more than four months have doubled their income, and 100 percent are profitable.

“That’s one example of how mobile can improve people’s lives,” Jacobs said.

Stephen Elop, chief executive of Nokia, joined Jacobs on stage and said that the goal is to bring another billion people onto the internet via mobile.