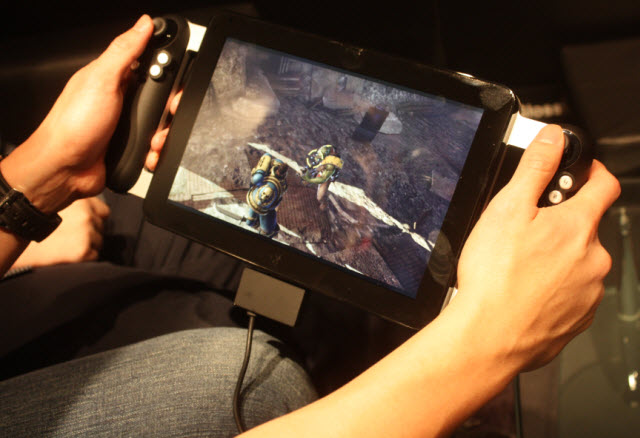 Min-Liang Tan, founder of enthusiast PC-gaming firm Razer, has been thinking about Fiona for a while. The concept project is part-tablet, part PC, and all gaming machine.

Tan showed off Fiona, a new concept tablet computer for gamers, today at the Consumer Electronics Show in Las Vegas. He loaded up the PC game Space Marine and started shooting away, using the game controls that were attached as handles to the side of the tablet. This is the sort of no-compromise PC gaming experience that can happen on tablets once Windows 8 ships, Tan said.

“Try to do that on an iPad,” he said. “Tablets today are good enough for casual gaming. This isn’t Angry Birds,” a reference to the lightweight entertainment that you often find on Apple’s iOS devices.

“This is the only tablet in the world designed specifically for PC gaming,” he said.

Fiona is a thick tablet that will take a much different form when it debuts in the second half of the year. Right now it uses an Intel quad-core Core i7 microprocessor, and it will eventually run Windows 8. You can rest it on your knees and lean back to play it on a couch. When Microsoft ships Windows 8, you’ll be able to use the Metro touchscreen interface to browse through games.

“This is going to run a full library of PC games right out of the box,” Tan said. “This is a concept device, and the design will change, but you can see that it has great graphics.”

You can socialize on the system and compare your score to other players’s scores. The system automatically accepts game controls such as Xbox 360 game controllers, so it’s easy to control the games. Fiona is a little heavier than most other tablets, but it has a full-fledged gaming computer under the hood.