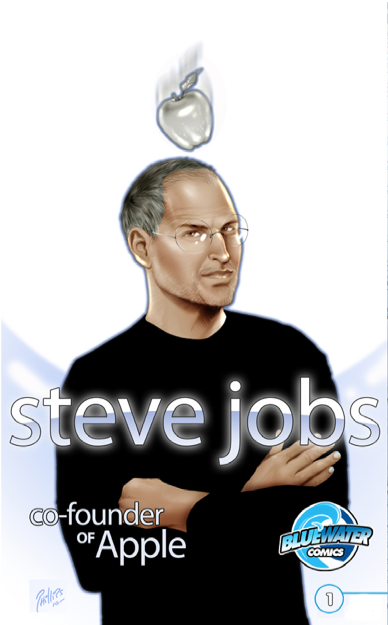 BANG! POW! SIMPLIFYING THE USER EXPERIENCE! Steve Jobs is being immortalized yet again, this time in comic book form.

The comic book is titled “Steve Jobs: Founder of Apple and is scheduled to hit Amazon as well as physical newsstands and comic books stores on Wednesday. Soon after Jobs’ death in October, people became hungry for more on his life story. Walter Isaacson’s biography was hugely anticipated, but despite its completeness, people still wanted more. Talks about unpublished interviews and plans Jobs may have left behind are still circling among the Apple fan crowd. What’s the next natural step? Make the story a cartoon.

Publisher Bluewater decided to create the book based on its previous success with another hot name in Silicon Valley: Mark Zuckerberg. The Jobs comic book is 32 pages long and chronicles his experience with Apple from the beginning. It does not, however, mention Jobs’ passing as the book was put in production prior to the event.

“Admire him or dislike him, Jobs’ vision and business acumen revolutionized the world,” said comic book author in a statement, “Between he and Microsoft founder Bill Gates, you would be hard pressed to find someone with greater influence over how we communicate, interact and do business over the last 30 years.”

This is not the first product to bear Jobs’ likeness since his death. Recently two companies, In Icons and Dragon in Dream Corporation, created an extremely realistic (scarily so) action figure of Steve Jobs. The doll was being offered at $100 with an estimated shipping date of February. That is, until Apple stepped in threatening to sue for unauthorized use of Jobs’ likeness and the Apple logo. The mini Jobs, complete with black turtleneck, was to be packaged with two apples and a “One More Thing” backdrop.

Bluewater, which also works with celebrities such as William Shatner, isn’t stopping with Jobs. A graphic biography of Bill Gates will be released in March, completing the trilogy of cartoonified powerful tech icons, who Bluewater says have a lot in common.

The Steve Jobs comic book will be sold for $4. The comic book was written by CW Cooke and illustrated by Chris Schmidt. You can also pre-order Bill Gates’ comic book here.