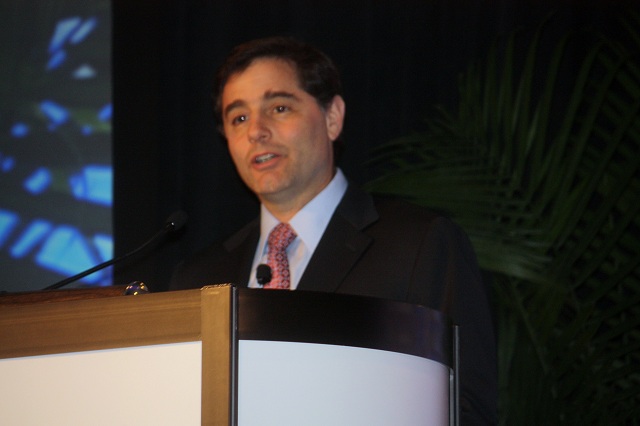 One of the ways to do that is to offer so-called incentive auctions that motivate the owners of current wireless spectrum to make them available to those who bid the highest. New York City, Genachowski said, does not need 28 TV stations using valuable spectrum that could be returned for use in wireless applications, and raising money not only for the private companies that own the spectrum but also billions of dollars in money that could help address the budget deficit.

He said a third of Americans — almost 100 million people — don’t have broadband at home. Closing the gap between haves and have nots would give the innovators much larger markets to go after. At the same time, the U.S. leads in the number of 3G subscribers and the American mobile industry has recaptured leadership in the industry. Tens of thousands of jobs have been creaetd.

“Our apps economy is the envy of the world,” he said.

Yet the spectrum shortage was one of the reasons that AT&T made its ill-fated bid to acquire T-Mobile, which owns a lot of spectrum, because of the rapid growth of data usage on mobile devices. Genachowski said that we need to get incentive auctions done for wireless spectrum and “we need to get it right,” he said. “We’ve led the world in spectrum policy.” He urged Congress to adopt legislation to endorse incentive auctions to make the U.S. more competitive with the rest of the world.The approvals should apply to licensed and unlicensed spectrum.

At the same time, he said in a conversation with Gary Shapiro, chief executive of the Consumer Electronics Association at the annual Consumer Electronics Show in Las Vegas, that the U.S. should innovate in making wireless spectrum more spectrally efficient by developing new wireless technologies. Without such approval, the country could fall behind.

While many people note that technology destroys jobs in the old economy, Genachowski said studies have shown that 2.6 jobs are created for every one destroyed in the innovation economy.

Last year, Genachowski told Shapiro that innovation was needed for U.S. companies to stay competitive in the creation of 4G wireless networks by moving faster, without interference.

This year, Genachowski walked the show floor and took note that there were more than 3,000 of them, each of them creating new jobs.

“Virtually every company is fueled by broadband Internet,” he said. “If you shut off the internet, virtually nothing on the show floor would work.”

He said there was innovation in education, healthcare, business, and other categories.

He noted that Thomas Friedman, columnist for the New York Times, wrote recently that when bandwidth goes up, the technology gets better and the products get more useful communications, Genachowski said.

“Though we can’t see it, spectrum is becoming increasingly essential to the daily lives of almost every American. This invisible infrastructure is the backbone of a growing percentage of our economy and our lives,” Genachowski said. He added that the looming spectrum crunch “threatens American leadership in mobile and the benefits it can deliver to our economy and our lives.”

Last year at CES, Genachowski also discussed wireless spectrum and what it means for universal broadband in America — but we found him to be vague on actual goals. This time around, it’s clear that both Genachowski and the FCC have a plan.

And this time, Genachowski made the case again for his long-awaited National Broadband Plan, which details what needs to be done to expand broadband access to all Americans.

As for the failed AT&T and T-Mobile merger, “it should remind us the benefits of competition.” Genachowski said that on balance, the system has worked. But in this case, AT&T, an American company, had to pay $3 billion to a German company because the deal was not consummated, Shapiro said. The law was sufficiently vague enough on antitrust matters that AT&T’s lawyers gave the merger a try.