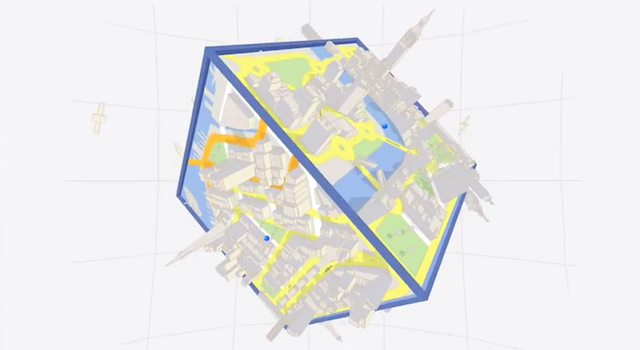 Watch out, Facebook. Google is making its own game for Google+ … and it involves maps.

Yesterday, the company released a video of the new game, which takes advantage of its Google Maps product. The video shows a cube with a map overlay. A small blue ball travels through the map based on the spinning and tilting of the cube. Judging by the video, it seems players will have to move through the map, hitting certain destinations to collect points along the way. When a destination is hit, a small piece of information about the place pops up, then you can go on to your next.

Google introduced games to its social network Google+ in August. Facebook, Google+’s major competitor, integrated gaming applications onto its platform long ago and has made a very successful business of it. In fact, Zynga, now a social gaming powerhouse with titles like Castleville and Farmville, recently debuted as a public company on the Nasdaq. Google+ didn’t wait the shadows for too long, however, and quickly attracted big gaming companies such as PopCap and Zynga to its own social network.

Facebook does not create games of its own. Rather, it focuses on one thing, sharing, and lets third parties develop on top of its open graph. Mark Zuckerberg, creator of Facebook, and chief operating officer Sheryl Sandberg recently told Charlie Rose in an interview that Facebook is shaving off extraneous products, such as Groupon-like deals, in favor of sharing. Sharing, for Zuckerberg, is the future of the Internet and the way people interact with content. Thus, Facebook doesn’t have its own gaming titles. On the other hand, Google is taking a small step forward as a horizontal company and making the games itself.

This game seems pretty lackluster at first: help a ball through an interactive map, woo. You can probably make some cool discoveries, as it allows you to reach a destination and then continues the map inside the building. But will probably get boring quickly and become a procrastination game. The game is slated to come out in February, so we don’t have to wait too long to see if Google takes this in the right … direction.

Yeah, let that one sink in.

via The Next Web