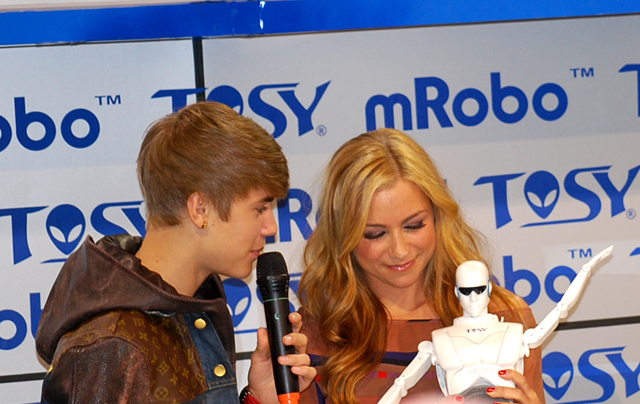 Canadian pop superstar Justin Bieber made an appearance at the Consumer Electronics Show on Wednesday to help promote a dancing robot from TOSY Robotics. No, he did not dance “the robot” with the robot, but hey, at least he signed some autographs.

Bieber was on hand to talk up the mRobo Ultra Bass robot, the latest device from Vietnamese manufacturer TOSY. The robot has a large speaker at its middle section to play music and it can dance along with whatever tunes it is playing. The robot did a relatively poor job of dancing during his performance and could only do the splits, but it the device is still in beta.

The Consumer Electronics Show floor often has celebrity appearances, but this was easily the biggest one in terms of crowds this year. People were crawling over each other to take photos, and several people I asked on the floor said they wanted to get pics for their children. Bieber’s fan base is comprised heavily of young women, and there was a group of girls that shouted “We love you Justin!” twice during his appearance.

TOSY expects the mRobo Ultra Bass robot to retail for $200 and it will be available in the fall of 2012.