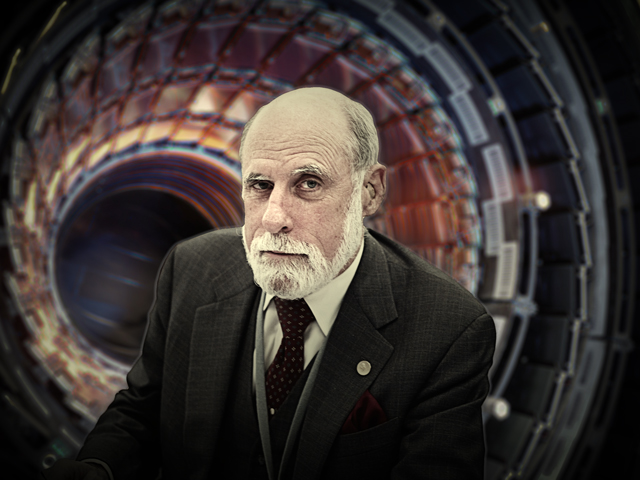 When Vint Cerf talks about Google’s upcoming global Science Fair, you can hear the infectious enthusiasm in his voice.

“I just am a huge cheerleader for getting kids interested in science and technology,” he told VentureBeat in a phone conversation yesterday.

But the Father of the Internet, who is also now a Googler, isn’t simply being patronizing. Oh, look at the kiddies playing with their toy volcanoes, how cute. He truly expects great science and fresh thinking to come from the fair’s crop of intelligent teens.

“I think there are some big surprises awaiting us in this round of the Science Fair,” he says.

“It’s important that the adults appreciate that young people are capable of doing really astounding work.”

As an example, another Googler points out 16-year old Harine Ravichandran‘s 2011 entry to eliminate power outages in rural India. This year, Google award a special “Science in Action” prize to the best project with positive, local community impact and the potential for use in other parts of the world.

Vint Cerf and the Science Fair

“The interest [in science and technology] has been difficult to stir up because we don’t give enough visibility to our scientists and technologists as we do to entertainers and sports figures,” Cerf says.

So part of the initiative to stir up such interest is the annual, global, online Google Science Fair. This year is the fair’s second in existence, and a handful of participants will be recognized for their work and awarded with prize money, scholarships and once-in-a-lifetime opportunities.

Cerf is, for all intents and purposes, the public face of the fair, which begins January 12, 2012.

“What’s really different is that we’re taking submissions in other languages,” he says. “I’m very interested to see what that does in terms of international participation.”

Of all the 13- to 18-year-old fair participants, who will create and upload their projects to Google’s site, 90 regional winners will be selected from all around the globe (barring U.S.-sanctioned countries such as Cuba, North Korea and Iran) — 30 winners each from the Americas, Europe, the Middle East/Africa and Asia Pacific. Google is offering support for 13 languages, a new effort to increase international participation.

From this group of 90, judges will select 15 finalists. Those finalists will travel to Google’s headquarters in Mountain View and will present their projects to a panel of judges (Cerf is one). The judges will then pick one finalist in each age group (13-14, 15-16, 17-18) and one grand prize winner.

As in previous years, Google is partnering with CERN, LEGO, National Geographic and Scientific American on the fair.

“I’m a huge enthusiast because it’s global,” Cerf said. “It’s an opportunity to show young people what science is all about and show the rest of the world that young people have interesting, fresh, creative ideas… and how capable our young people are in doing this sort of thing.”

We wondered what sorts of science experiments from the adult world had captured Cerf’s attention, as well.

“I am very curious about the Large Hadron Collider outcomes… to see if any string theories can be validated,” Cerf told us.

“Nanotechnology has my attention, the ability to create an unnatural material that will steer light around objects,” he continued, referencing recent advances in invisibility technology. “The materials that have been created can now do this kind of bending — I find that pretty fascinating.”

But what has Cerf most intrigued, it seems, is the origin and structure of everything we know and don’t know about the very space we inhabit — the vast unknown quantities of the universe itself.

“All of this pales as we start looking at cosmology and realize that we know less now at the beginning of the 21st century than we thought we knew at the end of the 19th century,” Cerf said. “We only know about 5 percent of the matter in the universe. We don’t know what dark energy is, we don’t know what dark matter is… we don’t have a clue.”

And here’s a tip for you undecided-major types: “If you get an interest in physics, you have a shot at the Nobel Prize because anything you discover about this 95 percent [of unknown matter] is bound to be new information.”

When we start talking about invisibility and the universe, I note that we’re bordering on topics that used to belong in the realm of science fiction and fantasy. I point out that a recent VentureBeat speaker, Leonard Nimoy (Star Trek‘s Mr. Spock), had expounded on the migration of science fiction into science fact.

Cerf wholeheartedly agreed with Nimoy’s assessment (and noted as an aside that he had previously worked with Nimoy on a television project, during which Nimoy’s sense of humor made it impossible to shoot a scene with a straight face).

“It sounds like science fiction, but the Defense Advanced Research Projects Agency, they funded [Cerf’s original and groundbreaking] Internet work, the interplanetary protocols work. Now theyre funding a design for an interstellar mission to get to Alpha Centauri within the next hundred years.”

Cerf said that with our current propulsion systems, it would take around 65,000 years to reach this star — obviously, the technologist noted, this would not do.

“The second problem is communication — how do you develop a signal that will be detectable over four light years?” he asked.

“Even though I won’t be around, the idea that you coud participate in what sounds like a science fiction story… there’s nothing more exciting than that. And it’s launching in 2012.”

In other areas of science fiction, Cerf pointed to the Jetson’s-like imagined future of the mid-century era, when we thought in terms of home automation and self-flying cars.

Again, Cerf sees some aspects of that fictional world becoming reality, especially with regard to the Internet of Things. “The Android OS is turning out to be of interest… in other devices, things that consume electricity, appliances around the house,” he said.

“We’re very proud of those cars,” said Cerf. “This is turning out to be an incredible period of time when we’re able to harness the power of computing in small devices and also harnessing huge computing power in the form of clouds.”