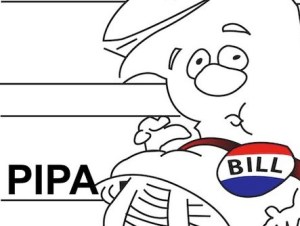 Sen. Patrick Leahy (VT-D) is backing down on portions of the controversial Protect IP Act (PIPA) after a massive amount of criticism from human rights groups and tech industry leaders, the senator said in a statement today.

PIPA, which Leahy authored, is essentially the Senate version of the House’s proposed Stop Online Piracy Act (SOPA) legislation. And like SOPA, it gives both the U.S. government and copyright holders the authority to seek court orders against websites associated with infringing, pirating and/or counterfeiting intellectual property. If it becomes law, it could drastically change the way the Internet operates. Under PIPA, if a website is accused of containing copyright-infringing content (like a song, picture, video clip etc.), the site could be blocked by ISPs (like Comcast), de-indexed from search engines and even prevented from doing business online with services like PayPal.

While Leahy isn’t renouncing PIPA, he did admit that more study is needed regarding stipulations in the bill that give the U.S. Attorney General authority to order ISPs to block a website accused of piracy violation. In its current form, the stipulation has drawn plenty of criticism from web security experts. By having the ISPs block select websites, it would prevent them from using DNSSEC, which is technology intended to add an extra layer of security to websites by checking for a special DNS signature to prove that the site is actually what it claims to be.

“This is in fact a highly technical issue, and I am prepared to recommend we give it more study before implementing it,” Leahy said in the statement, adding that he doesn’t believe ISPs would support a bill that would have a negative impact on their business. Yet, many of the ISPs that support both PIPA and SOPA are also major media companies. For example, Comcast owns NBC-Universal and operates an internet service business. (And as VentureBeat previously reported, Comcast’s internet network is incompatible with those PIPA and SOPA website blocking stipulations.)

The bill, which is currently scheduled for a vote on Jan. 24, is co-sponsored by over 40 senators. It also has public support from most major movie studios, record labels and media companies — all of which claim PIPA is necessary to thwart websites with piracy operations set up in foreign countries.

For anyone interested, we’ve pasted Leahy’s entire statement below:

“The PROTECT IP Act provides new tools for law enforcement to combat rogue websites that operate outside our borders but target American consumers with stolen American property and counterfeits.  One of those tools enables law enforcement to secure a court order asking Internet Service Providers (ISPs) to use the Domain Name System to prevent consumer access to foreign rogue websites.  This provision was drafted in response to concerns that law enforcement has remedies it can take against domestic websites, but does not currently have the power to stop foreign rogue websites.  I worked closely with the ISPs in drafting this provision to ensure they were comfortable with how it would work, and I appreciate their support.

“The process in drafting the legislation has always been an open one in which we have heard from all third parties, and have worked to address as many outstanding concerns as possible.  It is through this process that we have gained the support of the majority of third parties who will be asked to take action under the legislation, as well as a bipartisan group of 40 cosponsors in the Senate.

“It is also through this process that I and the bill’s cosponsors have continued to hear concerns about the Domain Name provision from engineers, human rights groups, and others.  I have also heard from a number of Vermonters on this important issue.  I remain confident that the ISPs – including the cable industry, which is the largest association of ISPs – would not support the legislation if its enactment created the problems that opponents of this provision suggest.  Nonetheless, this is in fact a highly technical issue, and I am prepared to recommend we give it more study before implementing it.

“As I prepare a managers’ amendment to be considered during the floor debate, I will therefore propose that the positive and negative effects of this provision be studied before implemented, so that we can focus on the other important provisions in this bill, which are essential to protecting American intellectual property online, and the American jobs that are tied to intellectual property.  I regret that law enforcement will not have this remedy available to it when websites operating overseas are stealing American property, threatening the safety and security of American consumers.  However, the bill remains a strong and balanced approach to protecting intellectual property through a no-fault, no-liability system that leverages the most relevant players in the Internet ecosystem.”