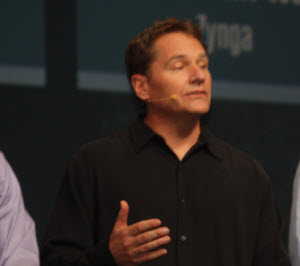 The hire is a big development in the war for talent between the two companies, which are in the midst of a major battle for control of the fastest-growing parts of the game business. Cottle will report to John Schappert, chief operating officer at San Francisco-based Zynga and the former No. 2 executive at EA.

Overall, gaming is undergoing a big transformation from games sold at physical stores to games that are purchased through online and digital means, from games played on Facebook to iPhone games. Cottle helped EA lead that transition at EA.

Cottle will be in charge of developing new businesses for Zynga. At EA, he was the head of EA Interactive, the division that makes mobile and social games and the part of the company that led the $750 million acquisition last year of PopCap Games.

Cottle has 20 years of experience in entertainment, technology and games. He was most recently executive vice president of EA Interactive and had headed EA’s mobile and social efforts over the past four years. After EA acquired the Jamdat mobile game business in 2006, Cottle helped build it from a few hundred employees into a 2,500-person division. Cottle was instrumental in the acquisitions of Playfish in 2009 and PopCap Games in 2010. At Zynga, he will help create new partnerships and run mergers and acquisitions. Now that Zynga has gone public and raised $1 billion, it could accelerate its M&A.

“It’s rare that you find someone who possesses a deep operational background and also has the vision to see where your business and your industry are headed,” said Mark Pincus, chief executive of Zynga, in a statement. “Barry is one of those executives.”

Cottle called Zynga “the pioneer and driving force behind the social games industry” and said he is looking forward to his new role there. Schappert said, “Barry’s understanding of the intersection that connects technology, games and entertainment is unmatched. I’ve always admired his ability to grow businesses and inspire teams. I’m proud to say he’s a colleague again.”

EA and Zynga are in a big grudge match. When Zynga went public in December, it had a bigger market capitalization than EA. But EA has since been trading at $6.47 billion, and Zynga’s value has sunk to $5.91 billion. EA’s digital business, which includes revenues from the division that Cottle headed, is now over $1 billion in sales, about as big as Zynga’s business in social games.

In a message to employees, EA chief executive John Riccitiello announced a reorganization today. Under it, the company named Kristian Segerstrale, former head of the Playfish business acquired by EA in 2009, will become executive vice president of digital. Segerstrale is “assembling a team for an expansive remit to define and manage the business side of the EA platform.” He noted that Cottle was leaving the company and “we appreciate his contribution to the evolution of our mobile and social business.”