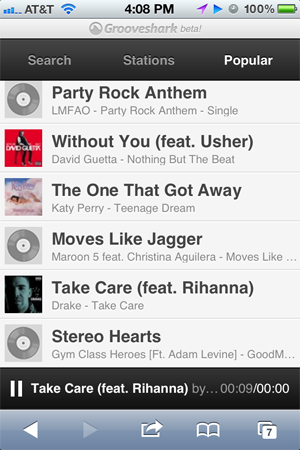 Grooveshark has been in legal hot water with the major music labels because it doesn’t have broad licensing agreements to play the majority of its music, unlike Spotify, MOG, Rdio and Rhapsody. Much like YouTube, Grooveshark depends on users to legally upload music that can be enjoyed by the community. If a user uploads a file that he or she doesn’t own and it gets a DMCA complaint, Grooveshark takes the file down.

The company has been in enough trouble that Apple and Google banned the service’s native music apps from their respective app stores, but with the launch of an HTML5 app it can now work around it. The new HTML5 app is accessible through mobile browsers and it works for the iPhone, iPad, Android 2.3 or later devices, the BlackBerry PlayBook and the HP TouchPad. At present, you must go to the URL http://html5.grooveshark.com and not just http://grooveshark.com from the browser, in order for it to work.

Overall, the app is super simple in design, but it is functional. As you can see in an iPhone snapshot to the left, the app has three tabs — Search, Stations and Popular. The Search tab lets you look for artists, songs and albums. When you find a song you want to hear from your searches, tap the song and it will begin playing and show up in a black bar at the bottom of the screen.

The Stations tab shows all kinds of pre-made radio stations, such as 80s, 90s Alt Rock, Ambient, Indie and R&B. And the Popular tab shows several of the most-listened to songs playing on Grooveshark. We’d definitely like to see more additions, such as artwork on songs that are playing and social recommendations, but this is still beta so we expect more in the future.

Have you checked out Grooveshark’s HTML5 app? What do you think?