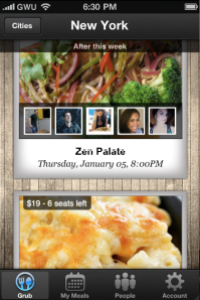 Grubwithus, the social-dining startup that helps people meet over meals in real-life, has launched an official iPhone app. The free mobile app is a promising step toward a future service that allows people to spontaneously book meals amongst themselves anytime, anywhere.

The service is already known for its “in-real-life” approach to social networking, bringing strangers together for prix fixe meals that are negotiated with partner restaurants beforehand. The social goals are very open-ended: people use the service to date, to professionally network, or to check out new eateries. It’s all up to the user.

The new app extends all the functionality of the website to the iPhone. It lets you search for and reserve meals, which you can easily pay for with a secure mobile payments system. Before you even sit down for your meal the check is split, tipped and paid. The app also carries over some of the existing social features of the website, namely chatting with friends you’ve made over past meals and viewing their profiles and meal histories. 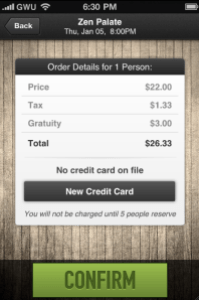 The app is beautifully designed, with a lot of attention to detail around its wood-based zen aesthetic. iPhone app aficionados may notice Grubwithus has forgone the Apple default iPhone user interface buttons and layouts that most developers work off. Instead, it has opted for a custom-crafted look that reflects the humble, counter-intuitive take on social networking the company is going for. The company will design apps for Android and tablet users next.

I’ve tested the app and it appears fairly stable and fluid, but I haven’t had a chance to book a meal on it, though I have booked several meals through the website in the past, to great (delicious) success.

The app is sure to make the Grubwithus process smoother. In the service’s earlier days, people had to print out “reservation cards” that had directions to their meal, a brief menu overview, and their name written in giant letters. The printouts were problematic: many people didn’t print them out, and restaurants were unsure about using them to confirm guests. I personally ran into these issues at most of my meals. The app changes all that, since it handily includes all the same information. 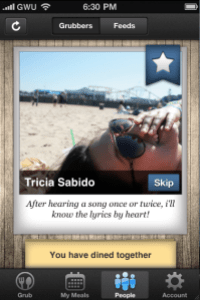 But the app goes beyond just replicating the old reservation cards. It also adds a social layer that was lacking on the website. Under a tab called “People,” you can scroll through a feed of your friends’ activity, and will receive push notifications when those friends book meals. This solves the problem of meal discovery many people had previously reported.

Co-founder Daishin Sugano also hinted to me that the new app will feature a photo component, dipping in the waters of crowded food “sharing” and recommendation startups like Foodspotting, Nosh, Chewsy, and Forkly. The app is aware of when you’re actually in a meal, and if you open it, there’ll be a photo button allowing you to take a photo and upload it to the site. What will happen with these photos is currently unclear, but Sugano says they have plans for something “more sophisticated” than competitors.

Despite these new features, the app is really a baby step toward the larger goal of allowing people to spontaneously meet for meals anytime, anywhere. This future hyper-connected meal-matrix is foreshadowed by the company’s recently launched “Create-a-Meal” feature that lets users setup their own meals with partner restaurants (a feature that’s soon to arrive on the iPhone). And as Grubwithus partners with more and more restaurants that see the value they’re adding, users will be able to pick spots and times on-the-fly, use geo-location to find one another, pay through the already established mobile payment system, and meet for their meal. 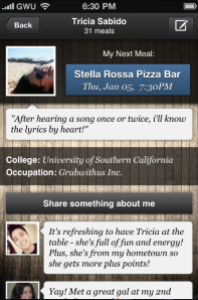 Grubwithus has over 30,000 registered users and a growing base of restaurant partners that currently tops over 650 nationwide. It received $1.6 million in May 2011 for its first round of funding after successfully completing the Y Combinator program. The Grubwithus iPhone app is available for free at the Apple App Store here.